It is pitch dark. A haphazard spot of light makes its slow way along a crowded mantle piece revealing an odd gathering of anthropomorphic creatures, some faded photographs, a tiny bird cage, a wound up toy, and many more. With this short short film produced for her DJCAD Masters show in 2013, Nicole Bennett investigates her relationship with the objects she has acquired indiscriminately over the years, put on display above the fireplace and forgotten about. 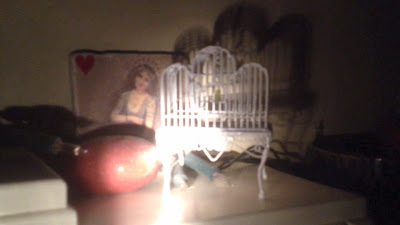 
By bringing them out of obscurity, literally, she renews her acquaintance with them, reflects on their nostalgic and sentimental connotations and what they mean to her and at the same time explores her own identity. Through her camera she puts some distance between herself and her familiar surroundings and becomes an observer, an ethnographer on a field trip collecting data.
The artist invites us to make sense of these artefacts, to speculate about their connection with each other and about the person who put them there. And just as the ethnographers’ interpretation of their findings is influenced by their own history and background, the narrative we weave around these objects tells more about ourselves than about the artist. We filter these images and fabricate a myth where we can reinvent or escape our own reality. 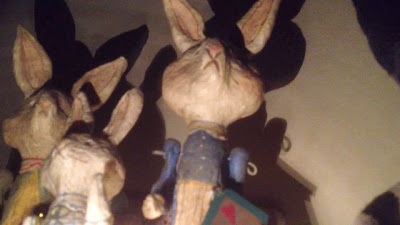 
Bennett’s skill as a myth-maker is to instil those everyday trinkets with mysterious and uncanny energy before releasing them on the audience.
The contrast between light and dark is a crucial device throughout her practice. She relates it to the current argument that our society may be moving away from the age of Enlightenment regulated by science and empirical study and returning to the Dark Ages, a shadowy period of history dominated by legend and superstition. 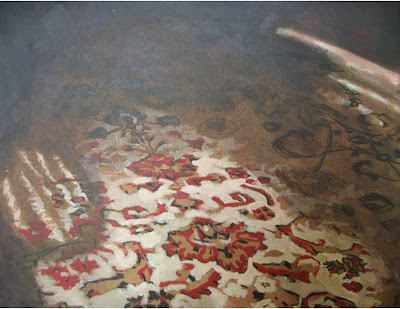 
Inspired by the carpet in her sitting room, she has produced a mesmerizing series of paintings saturated with glare lighting. She discovered this effect through some flash flooded photographs she once took, a happy mistake she found particularly evocative and that intensifies the duality of familiar and strange. The central pool of brightness emphasises the exuberant floral pattern but the overall mood remains ambiguous and even threatening with the dark edges closing in all around. 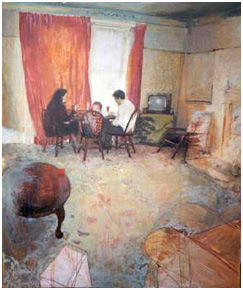 Cornflakes and Coke  120x140cm, mixed media on board
Art in Healthcare collection


Her work in the Art in Healthcare collection, Cornflakes and Coke, is a large painting that offers a daytime peek into her family life. The palette is softly toned and light pours into the room through the window and the half-drawn curtain. We recognise the motifs on the carpet. We also catch a glimpse of the fireplace on the right-hand side. The glare effect of the sun is achieved by practically draining the centre of the carpet from all its colours but instead of suggesting dark outer shadows, the artist has created a sense of haze by roughly sketching the surrounding furniture and wall features with pencil marks instead of paint. The scene is peaceful domestic bliss, in sharp contrast to her night time forays into darkness.

With thanks to Nicole Bennett

DJCAD Duncan of Jordanstone College of Art and Design