"Your brain is processing constantly millions of impressions and the more you look the more you remember... you have a warehouse of memories in your mind. Then you work in the studio, you distill, you make things that satisfy you, that delight you, that unburden you of imagery."


The tranquillity of the Scottish Arts Club lounge belies the hustle and bustle of nearby Princes Street’s Christmas shopping frenzy. George Donald looks at odds in these sedate surroundings for he is bursting with energy and ideas.

To interview George Donald is to go on a whirlwind journey around the world to the places he has visited and lived in. Born in Southern India of a Scottish colonial family, he was immersed from a very young age in the two countries’ contrasting cultures. 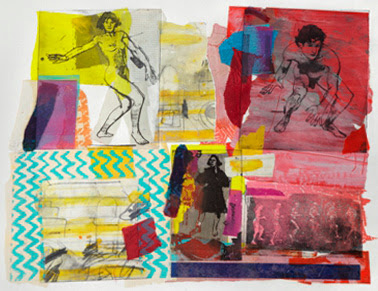 These early experiences and subsequent numerous travels have sharpened his “antennae” for visual stimuli while the study of worldwide diaspora has developed his aptitude for making unexpected connections between countries and even eras. He has over the years stored up a whole “warehouse” of images, all waiting for a signal to resurface when he least expects it and wherever he may be, here in Edinburgh or in a Kyoto garden, in China, India or Australia. 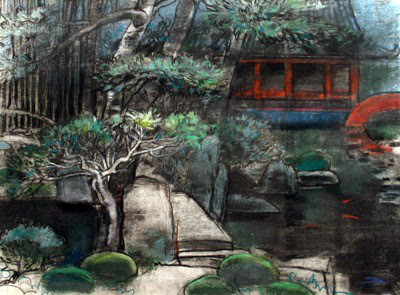 Consequently his prints and paintings are delightful juxtapositions of images and patterns that deliberately clash with one another so as to pique our curiosity. Printmaking informed his painting rather than the other way round and particularly chine collé, a process where tissue paper is pressed into the print, lends itself perfectly to this layering. But not content with simply following the established method, he has developed his own technique by hand-colouring and tearing the paper and using it to add emphasis here and there to stimulate the eye. 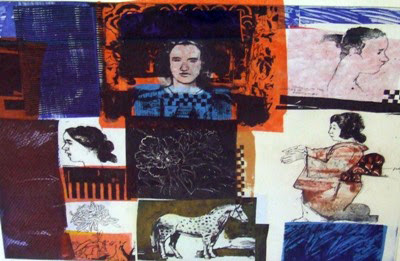 This innovative approach is characteristic of his inclination to challenge the status quo such as his decision in mid career to go and study for a four years part-time Master degree course in Education and Philosophy at Edinburgh University. This was in the late 1970s at a time of radical changes to the education system in the UK. Rather than just “grumble about it”, George went and learnt about governmental policy making. Years later he would use this theoretical expertise to push for the creation of a part-time degree at Edinburgh College of Art. And many of us are very grateful that he did. 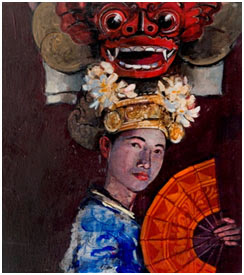 In his portraits, the subject often sustains our gaze intently.  When I query this with him, George evokes the paintings of the wives of Spanish conquistadores he saw in the Dominican Republic where, painted rather awkwardly in faded court fineries, the young brides look at the viewer as though stunned by the realisation of their doomed fate so far from home. Their eyes haunt him still. 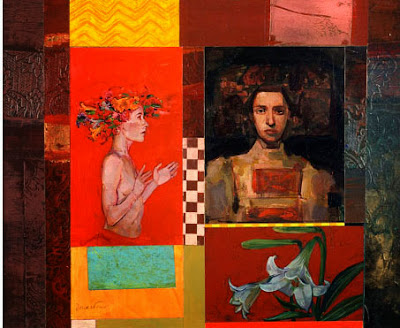 Renaissance Piece mixed media on board  60x54cm
courtesy of the artist


For this master of anatomy, the human body, the way people stand, facial expressions, someone’s shaven head, all are a constant source of fascination and inspiration. The Renaissance with its elegant costumes and music is also very much part of his work and his life as I learn that he has been a practiced chorister since childhood. Later he joined the Edinburgh University Singers, leading a double life, a scruffy art student by day and a smartly dressed performer at evening performances.

It may come as a surprise to learn that George Donald admires minimalist artists who convey so much with so little and that he wishes his work was “less complicated”. His trip to Japan was especially intended to study its calm and ordered sense of composition. 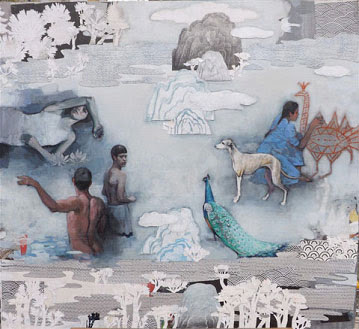 The paintings he exhibited in the 2013 Royal Scottish Academy Summer Show reflect this recent “de-cluttered” approach. Without the usual patterned borders and patchwork effect the elements appear to be floating on the canvas, but this does not diminish the impact at all as the fusion of cultures through metaphors is as powerful as ever.


Martine Foltier Pugh is a freelance writer and visual artist based in Edinburgh.

With thanks to George Donald.