"All good and genuine draftsmen draw according to the picture inscribed in their minds, and not according to nature." Charles Baudelaire

We meet in Edinburgh’s City Art Centre cafe across the road from Waverley station, a couple of hours before Alan McGowan catches a train due south for a week-long teaching residency.
This artist who will be leading two painting workshops for Art in Healthcare at the Edinburgh Art Fair next month, has no work in the collection yet but this is about to change.

McGowan has a busy peripatetic practice that takes him all over the UK and Ireland teaching drawing, anatomy and painting. A freelance career was not always the norm for this educator who was once based in the University of Northumbria until the gradual exclusion of drawing from art schools, an upshot of last century’s Modernist thrust, prompted him to take the life-changing decision of jumping ship. 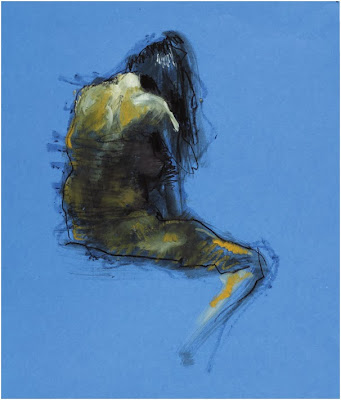 That is how passionately McGowan feels about drawing and more particularly life-drawing. He refutes eloquently the argument dealt against his discipline of choice that it is only a skill that requires no intellectual discourse:

“The way one draws is connected to how one thinks and interacts with the world. We reveal our vision of the world through our own process of drawing.”
Anybody who has attended a life-drawing class will know that everybody draws the same model differently. We each alter and distort what is in front of us in our own distinctive way into a representation of reality rather than a faithful reproduction. 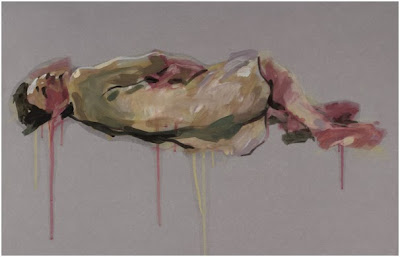 His commitment to life-drawing did not signal in McGowan a return to classicist principles. On the contrary he wanted to be regarded as a contemporary artist, a radical move at the time when conceptual art and installations were the avant-garde.
And so he went back to basics, re-learning to draw and see without the pseudo narrative that his training in illustration had taught him. All the time he was experimenting with techniques and materials, questioning his purpose and reading from thinkers as diverse as Montaigne, Proust and Camus to name a few. 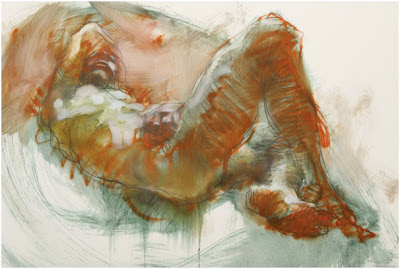 McGowan describes his relationship with portraiture as “strange”. He explains that it is more about connecting with humanity than about the individual. His models’ facial features are often only hinted at or hidden, his brush strokes probing deep below the naked skin for the elusive essential being and shared consciousness within.
Then he realised that all the drawings he had accumulated over the years amounted to a coherent body of work that backed up his argument that “there is an intellectual basis in drawing” and as such they needed to be shown.
An exhibition followed together with the publication in 2012 of a catalogue entitled The Language of the Body: Figure Drawings in Four Chapters with each of the 64 coloured plates displaying his expressionist style and fauvist palette. The book is divided into four categories ‘Between’, ‘Dissolve’, ‘Language’ and ‘See’. The only text is in the quotations that accompany each heading. This self-imposed restraint allows the readers to make their own connections. 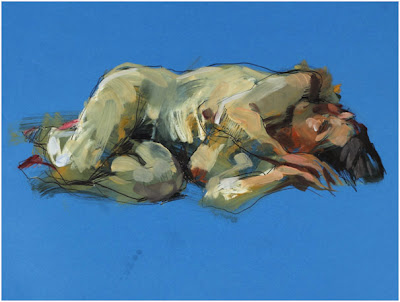 Alan McGowan’s relationship with portraiture is not only his and the model’s but also ours, the viewers, as we bring our own thoughts and circumstances into the reading of the work. When hung in a healthcare setting, it is guaranteed to stop people in their track. It will take on new meanings and provoke a variety of interpretations and emotions in patients, medical staff and visitors. This is the measure of the artist’s success in his endeavour.

With thanks to Alan McGowan.

Alan McGowan is one of six artists involved with Art in Healthcare at the Edinburgh Art Fair in Edinburgh Corn Exchange (15-17 November). He will be giving two demonstrations on 'Painting from preparatory sketches' on Friday 15. For more details and the full programme go to  http://www.artinhealthcare.org.uk/userfiles/file/PDF%20Artist%20bios%20and%20talk%20info.pdf