Interning for the voluntary sector

Last Friday, Art in Healthcare (AiH) opened 'Art from Art', an exhibition of works created during artist-led workshops in care settings across Edinburgh. Such a project takes much time to set up, a challenging task for a small organisation run by part-time staff and beyond their dedicated volunteers’ call of duty. 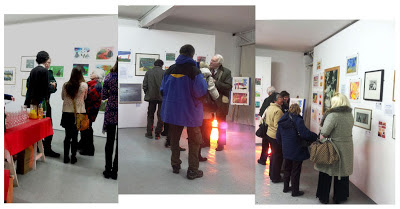 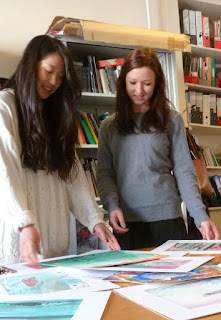 How did AiH manage to pull this off?
Outreach Manager Amelia Calvert explains that they have been very fortunate to benefit from the assistance of four interns over these past few months. Each one works closely with a permanent member of staff on specific tasks and areas selected to match their requirements and interests, curating, publicity, IT, administration, art therapy. The four interns follow three very different internship models.

The two unpaid students from Edinburgh University Art History department come to the office once a week and their placement is an integral and assessed part of their postgraduate art degree.
The Scottish-based intern was recruited by Community Jobs Scotland, a programme that places young jobseekers into full-time paid employment with non-profit organisations and the graduate from Spain is on a full-time paid European internship programme.

Edinburgh University students
Urara and Hayley curating artworks
image courtesy of AiH
How does it all work out?
“The interns come to the office on a regular basis” says Amelia “they can be assigned specific tasks to be completed over a long period of time. In this way they are more like members of staff than volunteers. Also, they all have in common an inclination to build up skills and experience that might aid their studies and/or future job applications. For this reason, we aim to give them projects that they can ‘get their teeth stuck into’ and call their own. We fully rely on them as if members of staff so that they can appreciate what it’s like to be committed to work for an organisation."

What about the time AiH has to invest in training these new recruits?
“Granted it takes time and energy to train them and oversee their work” Amelia continues “but we generally find this is worthwhile for the input that they give back to us.” 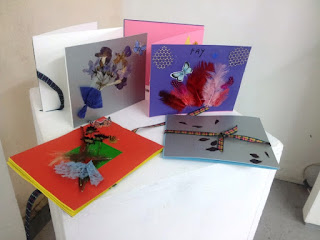 A win-win situation
The feedback from the interns is equally positive and reflects the adjustments each has had to make and what they gained in the process. “I am hoping to gain a general understanding of how a small arts-based organisation works – which I think I am!” says Hayley Thomson. “My responsibilities within the team have extended to a wider range of activities than I had expected, but I enjoy it a lot... I think I definitely have improved my communication skills... My time at AiH has broadened my understanding and interpretation of art and its impact on society.” says Urara Hatano.

Amelia concludes “Furthermore, we feel we are helping to launch the career of keen young workers, which is the least we can do in a society where jobs and ‘having something to do’ is not always easy to come by...”

Credits
With thanks to Amelia Calvert, AiH Outreach Manager, Urara Hatano and Hayley Thompson for their contribution.

Posted by Art in Healthcare at 17:48 0 comments


Colour can provoke a powerful emotion in artists, Claude Monet called it an ‘obsession’, and it is this passion for colour that comes through first in printmaker Alastair Clark’s intense images.


Glasgow born Clark graduated from Edinburgh College of Art in Drawing and Painting in 1990 and went on to specialise in printmaking. He is now Assistant Director of Edinburgh Printmakers Workshop where we meet early one morning before the start of his busy day.

He explains that his practice is about the transformative process of printmaking that gives him the freedom to edit images and experiment with tones and that unlike painting where every brushstroke is locked into an unbreakable sequence, printmaking allows him to go back a step or two or more to introduce a different hue or a different perspective.


It is the energy and the beauty of the forces of nature that inspire Clark. Working from satellite image sequences, he takes on those great swirls that permeate our everyday consciousness and shock us with their power for destruction and step by step constructs series of images which although still recognisable are now essentially abstract.


If you get close enough you will notice subtle and deliberate marks in pen
and pastel which are there to remind us that the artist retains manual control over the mechanical printing process.


“The prints Longwave and Ammonite Sky were inspired by the Tsunami of Boxing Day 2004, their long shapes originating from weather satellite imagery which I stretched and enhanced until they reminded me of a wave, notably the Japanese printmaker Hiroshige’s famous wave, which also represented a Tsunami.”

Art in Healthcare owns three of Clark’s prints, including this two-part screenprint / lithograph entitled Red Sky at night where the close up view on the left enables us to observe a detail from the bigger picture. Clark often uses this diptych format as a device to provoke our curiosity. For him art and science share the same purpose which is to make us question the world around us.

For the Skylight series Clark worked with the Aurora Borealis which he describes as an elusive mystical phenomenon that few are privileged to witness.

After a sighting in Edinburgh, he started by drawing on paper with pastel, he then scanned these drawings and combined them with digital images to reconstruct the display of pure energy he had experienced. With this process of altered reality, Clark certainly gives the series a multi faceted mythical perspective.

There is humour too as the skylight component is a reference to the small aperture near the magnetic poles through which the charged particles enter the earth atmosphere.

Borders and edges are of particular importance to printmakers and Clark’s more recent work plays around with this element. His 2011 ‘Skyshapes’ series, consists of assembled weather satellite scans printed on delineated MDF supports which seem to be floating off the wall. He is currently pushing this idea further still by meticulously creating fictitious islands constructed from pieces of Scottish islands. With these he intends to explore climatic change by showing the relationship between the land and the elements.

Credits
Thank you to Alastair Clark for his time and for the use of his images.

Posted by Art in Healthcare at 11:13 0 comments