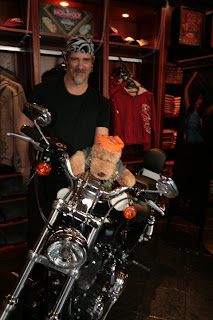 noun; an activity performed with the goal of promoting the well-being of fellow man.

There has been a lot of interest of late concerning philanthropic activity. Bill Gates for example has managed to persuade 40 other American billionaires to give at least half their fortunes away to good causes. Gates established a foundation in 1994 and since then he has donated nearly $23 billion for health and development in poor countries and to improve access for Americans to opportunities they need to succeed in school and life.

(photo: Hard Rock Cafe staff member, Mike Hawker, promoting his 'Tour for a Cure' fundraiser)
However, as the definition above suggests, philanthropy is not only about giving away one's monetary wealth. It also incorporates the ‘altruistic concern for human welfare and advancement’ and therefore, any kind act with intent to better another individual or group’s situation or lives could be considered a philanthropic act.

On that note, I would like to draw your attention to the huge amount of energy and resources that a local business is expending to help our charitable organisation. Like many charities at the moment, we are struggling financially to make ends meet. I approached Dave Pellow, the General Manager at the Hard Rock Café, Edinburgh near the beginning of the year to ask if he would be interested in helping raise money for Art in Healthcare. Mr. Pellow thought it was an excellent idea as, although the HRC regularly raises money for various causes around the world, this would be the first opportunity for the Edinburgh restaurant to help a local and very ‘visible’ charitable organisation.

Since then, we have been working closely with the Hard Rock Café on a fundraising project involving a hand painted Gibson Epiphone guitar. Prize draw tickets to win the guitar have been printed and can be picked up at the restaurant as well as at the UNIONgallery. With the Edinburgh Festival taking place this month, the Hard Rock Café is, as usual, heaving with thousands of people from far and wide. I’ve been told the entire staff at the restaurant (and there are a lot of them!) have all been working exceptionally hard letting the visitors from around the world know about this guitar prize draw and also about the charity behind it. A special mention goes out to Mr Mike Hawker, who has taken this almost as a personal crusade to raise money for our charity.

Interestingly, Mr Hawker ‘Edinburgh’s Hard Rock Café leading philanthropic ambassador', organised his own charity event to raise awareness for Prostate Cancer Research, last Father’s Day. Including a day with fun filled activities for the whole family, he also drummed up support from the Harley Davidson’s Dunedin Chapter to provide rides along George Street for the guests. Then, Mr Hawker himself, toured around the UK on his ‘Tour for a Cure’ road trip to continue to raise awareness and funds for his cause. 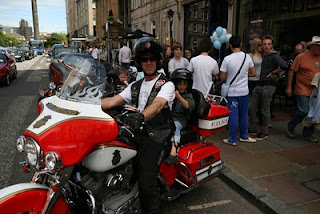 This just goes to show that we don't all have to be like Bill Gates or other billionaires, offering up half our fortunes to make a difference. Whether it's one business, like the Hard Rock Cafe helping a local charity or even one person, such as Mike Hawker, taking it upon himself to make the world just a little bit better - we can all do something that counts for an act of philanthropy. It doesn't have to be big; it doesn't have to be worth billions, it just has to be about spending a little time doing something worthwhile for someone else. 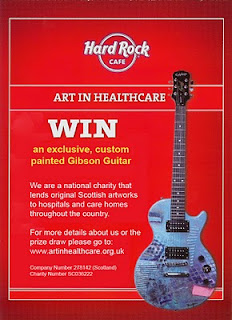 The ballot cards for the Art in Healthcare charity fundraiser have arrived from the Hard Rock Cafe! So who wants to win this guitar?
Oh, and good news for all our overseas friends, this prize draw is open not just to UK residents but to anyone.
No purchase is necessary but donations to Art in Healthcare would be greatly appreciated. Just click on these links to donate at the Art in Healthcare website or at the artist, Trevor Jones' website.
Draw Date: 31 December 2010
Good Luck!!
Posted by Art in Healthcare at 10:50 0 comments