Gill Tyson has no less than eighteen works with Art in Healthcare, more than any other artist in the Collection.  Together they denote a wide range of media and printmaking techniques, extensive travels across the globe, a love for remote landscapes and last but not least, a giving disposition. 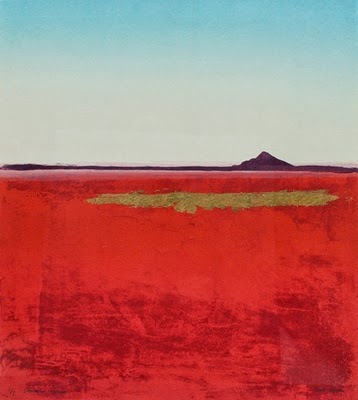 She exudes vitality and it comes as no surprise to learn that she studied the joint MA (Hons) in History of Art and Drawing and Painting at the University of Edinburgh. She reckons that her multi-tasking approach to work is due to this early dual training.
Printmaking was an option Tyson took in her final undergraduate years and she found that the department’s nurturing ambience suited her better than Drawing and Painting. Soon after graduating she joined the Printmakers Workshop, later to become Edinburgh Printmakers where she found the same support she had enjoyed at art college. Typically she soon gave back as much as she had received by serving as chairperson on their committee at a pivotal time of change in the 1980s. 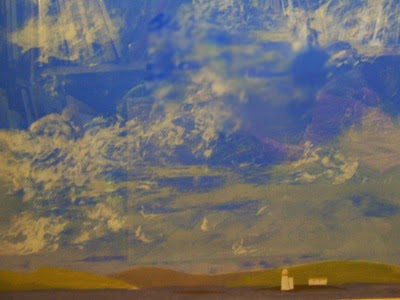 She is clearly passionate about printmaking and while lithography is her main practice, she uses a whole variety of techniques from traditional to digital technology. This is no mean feat as they all work on different principles. She loves the lithographic process and finds the grinding and preparation of the stone relaxing and conducive to the planning of her composition. Printmaking is all about deconstructing the image and rebuilding it layer by layer, like a slow form of painting, she explains, and because colours are applied sequentially, you have to adapt each one according to the others. 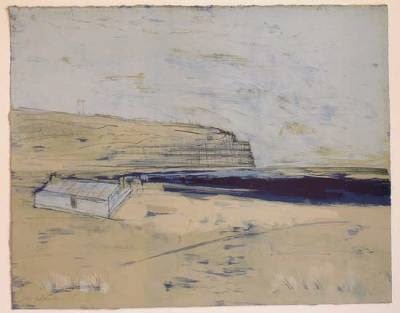 She frequently mixes elements from these different techniques to capture even the most subtle effect, screenprinting for opacity, manière noire for a touch of drama, soap washes for paler appeal and hand-drawn marks for direct impact. Her range of skills and her ability to adapt and switch between methods have proved to be most useful to her at times when working away in less well equipped studios.
This versatility imparts freshness and immediacy to her works while her calculated economy of details draws you into her compositions. You feel included in the landscape rather than an onlooker. 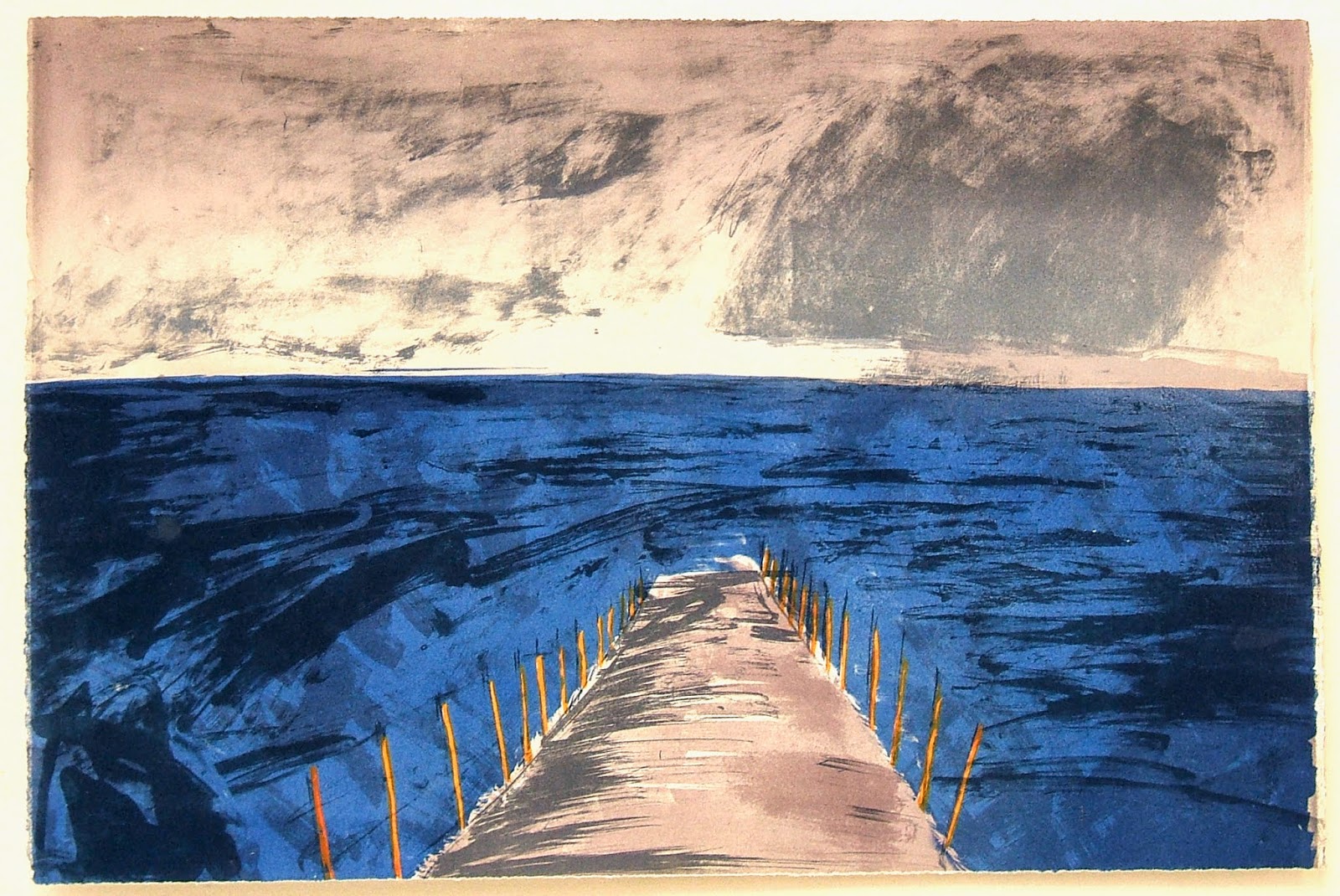 Her predilection for marginal places has taken her to St Kilda, the Lofoten Islands and the Namib desert among others, all names synonymous with harsh and precarious living. Humans’ aptitude to survive in those inclement conditions is often acknowledged in her vast landscapes by some small and somewhat futile signs of their presence like a telephone box or a tattered poster. She dedicated her exhibition ‘Shelter’ at the Open Eye Gallery in Edinburgh in 2013 to this topic. 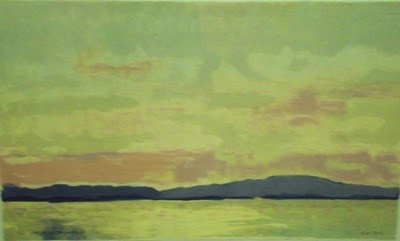 Out To The Atlantic  screenprint 63x85cm
Art in Healthcare Collection

Gill Tyson is currently organising an exhibition of fine prints created by the Edinburgh printing firm Harley Brothers whose master printers collaborated with the great names of Scottish art during the 1950s and 60s before going into decline. Their lithographs of works by Anne Redpath and Elizabeth Blackadder and many more will be brought together for the first time in Gallery Ten in Edinburgh, a space Tyson co-founded in 2012. 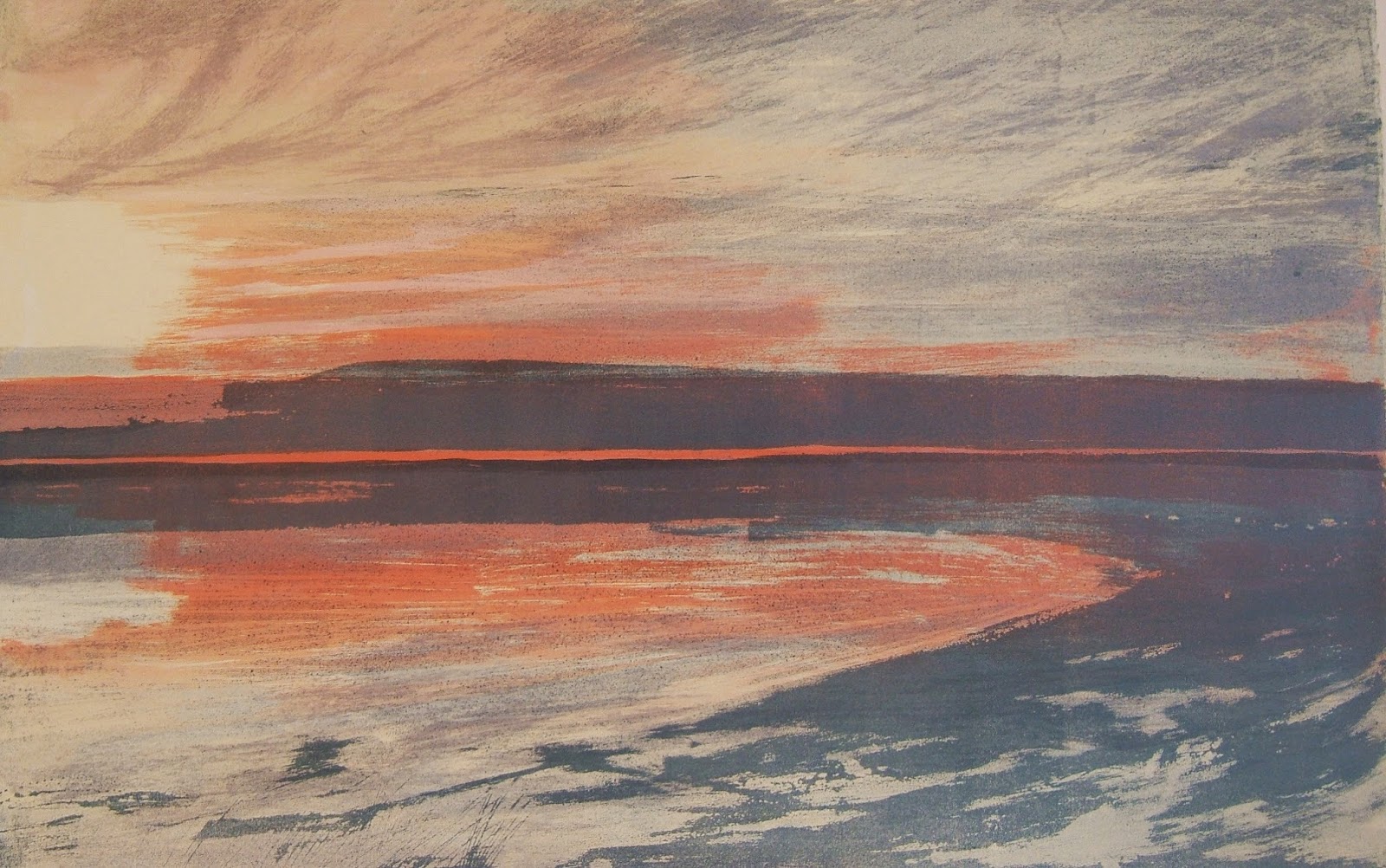 Strange Place, Believe Me  lithograph and screenprint 83x90cm
image courtesy of the artist


She is delighted to have been selected as the 2014 Printmaker of the Year by ‘Printfest’, an event based in Ulverston in Cumbria across the bay where she was born. She will be making new work during her residency and will help generate interest into her art, a role she is looking forward to with characteristic enthusiasm.

With thanks to Gill Tyson