An assumption some people make is that students spend their spare time partying. Or not, in the case of the members of one particular Edinburgh University society as I found out when I met their president Sarah Johnston who explained how the Art in Healthcare University Student Friends organise a variety of activities in care homes for the elderly, in play schemes for teenagers and in schools. 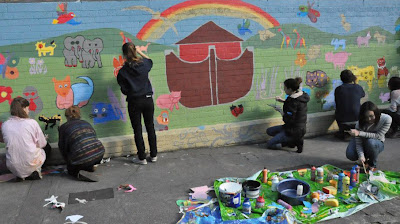 Sarah tells me that although the society has only been running for three years, they already have sixty members who come from very diverse departments, Medicine, Engineering, English, Law, History of Art to name just a few.

What draws them in?

Art for one thing. Some members took art at school but had to drop it, so now they can enjoy doing it through the society, says Sarah.

Art in Healthcare helps by giving them some guidance and ideas for workshops but art practice in itself is not an essential requirement, enthusiasm and a willingness to try amply compensates for any lack of skills. What is far more important is enjoying working with people. 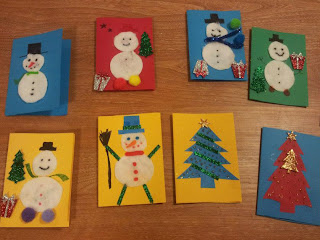 Every Wednesday the society visits Lennox House, a care home in Edinburgh. They go as a group and offer a one on one experience to the elderly residents who, for one hour, engage in topical art projects such as Christmas cards and a chat. It is not surprising that their sessions get the biggest turn out of all the workshops in the care home. And the feeling of satisfaction is mutual judging by these two volunteers' feedback:

"I have been inspired by the residents of Lennox House, who all have such vast catalogues of memories and experiences to share!"

“It was a really rewarding experience. I had a lot of fun! It’s nice to work on a project and see a smile on their faces afterwards.”

The society from time to time organises activities for the teenagers who attend the Star Youth Club in North Berwick. This service is very well received not only by the youngsters, but also by the staff who appreciate how much the children benefit from the creative activities the society offers. The young artists must have been thrilled when the Youth Club exhibited and sold some of their artworks at the Edinburgh Art Fair which helped raise funds for their play scheme. 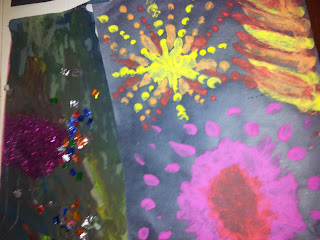 Other projects have included painting a mural to brighten up the neglected playground of Mannafields primary school in Edinburgh. The theme was Noah’s ark and the children were involved in the design of the animals during workshops led by the Society. It took the volunteers four days to complete the work.

As well as their regular weekly activities the society members also find the time to fundraise to cover their travel and materials costs. If any of you readers came to Art in Healthcare’s ‘Art from Art’ exhibition in February, you will remember those delicious and beautiful cupcakes!

This overview of their activities is by no means all-inclusive, but it gives you some idea of the time and dedication the society invests in the local community. However their success does not rest only on their excellent organisation and management skills, it is also about the fun they get out of it and the enjoyment they give others.

Don't miss out on any of our forthcoming blog posts. Subscribe by email address at the "Follow us by Email" above right and receive notifications when we make a new entry.

Coming up next the 'Artist Uncovered' post on Barbara Rae.

Posted by Art in Healthcare at 22:13 1 comments

Two large canvasses face each other in Kate Downie’s studio, their typically energetic and expressive marks awaiting her finishing touch before their exhibition this summer at the Royal Scottish Academy. One is a reconstructed view of Beijing where she did a residency in 2011, eagerly immersing herself in the street life of the city, and the other is a sweeping and empty landscape. Despite or rather because of the absence of human forms, the juxtaposition of the dark monolithic cityscape with the depopulated countryside is characteristic of Downie’s sensibility for the human condition. 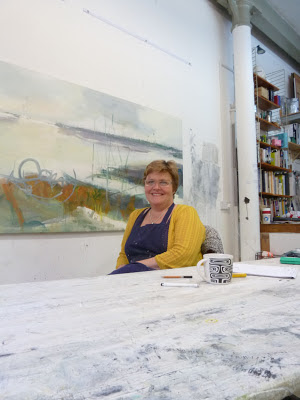 Kate Downie in her studio

She recalls vividly deciding to be an artist at the age of five, she was better at drawing than reading, and credits her later outsider’s aesthetics to being uprooted, aged seven, by her British born parents from her native North Carolina to the North East coast of Scotland.
Another clear childhood memory is her first sighting of the Forth Rail Bridge from the train down to Edinburgh. The iconic structure is a particular favourite of hers. She once set up studio on Inchgarvie island, right under the bridge, in a structure made out of scaffolding poles . She has sailed under it and today she is thrilled at the thought of abseiling off it during the sponsored event organised by Art in Healthcare in May! Kate Downie’s enjoyment of life is evident and so is her inquiring mind as she sketches on her newly acquired iPad while we talk. Drawing is second nature to her. 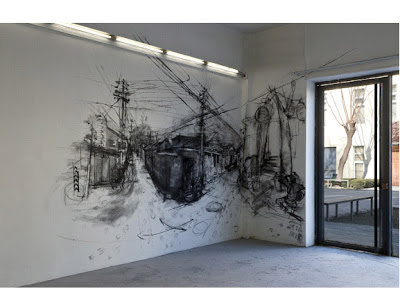 The Concrete Hour, wall drawing, mixed media,
Where, Where Artspace, Beijing
Image courtesy of the artist

This residency on the island led to a wall installation in the Round Room of the Talbot Rice Gallery. Performances and wall drawings occupy a special place in her practice. She adds almost with a pinch of regret that in different circumstances she would have been a graffiti artist. While in Beijing, she drew a cityscape, ‘The Concrete Hour’, on the walls of the gallery dominated by flyovers where she was based and punctuated her charcoal drawing with marks made with bicycle tyres and shoes. She is looking forward to doing a performative drawing this summer in the Kelly Gallery in Glasgow which, incidentally, is only a ten minutes walk from the city’s own Chinatown, itself situated under the M8 motorway as it slices through Glasgow.
Kate Downie has more than a penchant for the liminal and the transgressive. Coastlines, crossroads, flyovers, bridges, the gaps in between, all are transient spaces that she actively seeks out and celebrates with Romantic sensitivity. 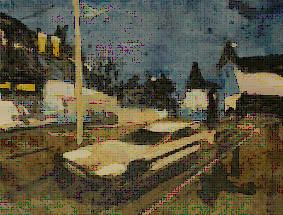 Her drawings and paintings are not simply triggered by visual stimuli here and there, they come from deep within. They are conceptual portraits. Each has its own place among the others and can take anything between a few weeks and several months to gestate. Her compositions emphasize the space around objects or ‘negative space’, a term she regards as a misnomer because these optical reversals bring about new awareness for our surroundings.
She mentions Rachel Whiteread’s ‘House’ where that artist created an inside-out domestic space by casting the whole interior of a house. Like Downie’s works, Whiteread’s sculptures are about the memory of the people who inhabited the space but unlike Whiteread, Downie invites, urges us the viewers to step in and complete her drawings and paintings.


Credits
Thank you to Kate Downie for her time and input and for her warm welcome.
Links
To find out about Kate Downie's abseil fundraising event for Art in Healthcare, go to http://www.justgiving.com/katedownie1
Kate Downie’s website and online gallery http://www.katedownie.com/gallery.php
The Royal Scottish Academy http://www.royalscottishacademy.org/ where her exhibition ‘Walk through a resonant landscape’ will run from August to October 2013
The Royal Glasgow Institute Kelly Gallery http://www.royalglasgowinstitute.org/ where she will install and perform this summer.
Where Where Art Space, Beijing http://www.wherewhereproject.com/index.html
The Forth Rail Bridge http://www.forthbridges.org.uk/railbridgemain.htm
The Talbot Rice Gallery http://www.ed.ac.uk/about/museums-galleries/talbot-rice
Rachel Whiteread’s ‘House’ http://www.urbanghostsmedia.com/2012/07/house-rachel-whiteread-art-victorian-home-193-grove-road-london/
Posted by Art in Healthcare at 16:43 0 comments