When I met up with artist and gallery owner Alison Auldjo, she told me that she considers herself lucky and it is easy to see why. She set up the UNIONgallery in Broughton Street, a creative and buzzing niche of Edinburgh, with her husband Rob Dawkins at a time when few would have been brave enough to do so. She brought together an impressive group of artists and three years later, she can claim a string of successful shows to her credit.

But this kind of achievement takes more than luck, it takes hard work, dedication and passion. She works closely with the artists, she considers them more like partners than clients and she is passionate about art, she confided that she could not show something that she does not like.

The same qualities are also true of her own practice. Her oil landscapes are strong compositions inspired by Scottish sceneries typically in earthy autumn colours such as ‘Across the Water’ which is in the Art in Healthcare collection. The broad horizontal bands of strong colours take the eye step by step up to the sinuous hills in the distance where the vast tranquillity of the sky calms down the scene below. 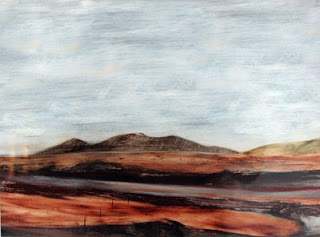 This duality of mood is a recurring feature in Auldjo’s work where she frequently offsets areas of intense emotions with wide expanses of stillness. In ‘Open Spaces’, the fiery tones and energy of the brush strokes in the distance and around the barren trees on the right are counterbalanced by the milky tones of the pond in the foreground and by the flat blue-grey sky. 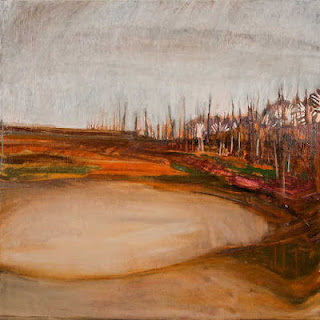 Although her landscapes depict actual places in Scotland, often the undulating Lowlands around Bonnybridge where she grew up, they deal with more than just topography. Her style is expressionist and, with contrasting components, she reveals through her paintings conflicting inner thoughts of elation, doubt or contentment and, a desire for ‘breathing space’. Some of her compositions are inhabited by animals such as birds and hares which, she explains, represent escape and survival. She believes in safety in numbers which, incidentally, happens to be the title of one of her paintings where two birds fly upwards in unison. This motto also typifies Auldjo’s vision for the aptly named UNIONgallery.

Auldjo pushes these universal themes further still by giving some of her animals an indeterminate and primeval appearance, such as the four-legged beast which features in ‘Into the Wilderness’. This poignant creature reached its final manifestation through many transformations and gives the painting the dream-like quality of symbolist landscapes, poised as it is on the edge of darkness.

Alison has now sold all the paintings from her solo show ‘Gone to Earth’ a year ago and is already thinking of her next show in 2014. She is planning once again to throw caution to the wind and despite the widely held view that in times of difficult economic climate, you should use a bright palette, she will follow her inclination which serves her so well and do the opposite. We look forward to it.

Martine Foltier Pugh is a freelance writer and visual artist

With thanks to Alison Auldjo for her information, the use of the images and for the tour of the gallery.

You will have seen them in magazines, on bank statements, food, clothes labels and business cards. The black and white square QR codes are appearing everywhere. You might find their two-dimensional pixilated look intriguing in a way that the linear one-dimensional bar codes have now ceased to be and you might be wondering at their purpose.
QR (Quick Response) codes started as a tracking device in the automobile industry and today can be accessed by anyone with a smartphone equipped with a camera and a code reader, a free downloadable app for smartphones. All you need to do is click the barcode reader app, point your phone at the QR code and that's it - immediately the encoded information appears on your screen. There is no need to key in a long website address and you can do it all while on the move. You can even create your own code and download it on printed materials or online.

Here's a short video explaining how to use a QR code.

Art in Healthcare was prompt to recognise the benefits of this technology for their art collection displayed in hospitals and care homes and earlier this year, they initiated a large task that involved several of their staff and a dozen volunteers. Artworks and artists were researched and the information was uploaded to the artworks' webpages selected for the new Royal Victoria building at the Western General Hospital in Edinburgh. There are more than 50 artists with artwork in the Royal Victoria including Elizabeth Blackadder, Alan Davie and John Houston.

Abi Allsopp, the AiH Media Manager, explains: “When a label is scanned by smartphone, a webpage for that specific artwork is opened and the viewer can find out all sorts of information including descriptions and details about the work they're looking at, the life and work of the artist who painted it, and other pieces which are similar to it. The project at the Royal Victoria building was generously sponsored by Laing O’Rouke building contractors and match funded by Arts & Business Scotland. Since starting the project in June we've had almost 100 page views per month.”

The number of views mentioned by Abi confirms the opinion generally held that QR codes are more than just a passing phase. The benefits to the patients, staff and visitors are obvious, the QR codes enrich the experience of the artworks and of the moment by opening a whole world of ideas and information in just a few seconds.
If you have not tried it yet, why don’t you have a go with the two QR codes below. 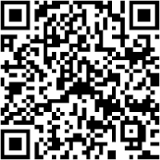