Martine F Pugh searches for the man behind the genius

Ian Hamilton Finlay was a philosopher, a poet, an ‘avant-gardener’, a sculptor and a revolutionary in thoughts and temperament. How should I uncover arguably the greatest Scottish artist of the twentieth century?  Then I came across an insightful essay by his son Alec where I learnt that Finlay suffered from agoraphobia all his adult life. His affliction revealed to me the man behind the genius and somehow it all began to make sense.

Finlay dismissed his ‘nervous anxiety’ as “unpleasant, but no more interesting, really, than toothache” but his son’s tribute shows what profound effect his fear of busy urban streets had on his life and work and how it inspired him to create  gardens and organise work settings where he could feel safe in natural but controlled rural environments.

Little Sparta, Finlay’s best known garden and artwork, is situated in the Pentland Hills, south of Edinburgh. Originally called Stonypath, it was an untamed moorland with only one tree in 1966 when Finlay and his wife Sue moved in. With Sue’s planting and Finlay’s planning, it evolved slowly, money was scarce,  into the series of verdant gardens we can visit today that are filled with neo-classical references to Ancient Greece, Finlay’s spiritual and cultural home, and to the French Revolution whose theorists he greatly admired. 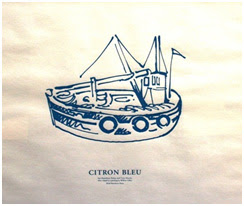 Art historian Bill Hare defines Little Sparta as “a masterly twentieth-century reworking of the Enlightenment Landscape Garden where Apollonian power of reason seeks to control and order through art the ever-threatening chaos of unruly nature.”

What is true of the great eighteenth-century landscape tradition is also true of Finlay’s endeavour to control his own emotions by immersing himself in art and in the physicality of gardening.

But Apollo carried a bow as well as a lyre and when his Arcadian haven came under bureaucratic attacks in the late 1970s and early 1980s, Finlay channelled his frustration and anger into artistic ‘wars’ through sculptures, poems and prints. Stonypath then was renamed ‘Little Sparta’, an allusion to the Spartan wars of Antiquity against Athens and to Edinburgh’s nickname of ‘Athens of the North’.

His movements may have been restricted but Finlay was nonetheless well informed as he corresponded with writers and poets in Britain and around the world. He also surrounded himself with friends and collaborators who were curators, publishers, printmakers, poets, sculptors and stone carvers. With his garden, they provided him with the supportive environment his creativity needed. His genius was to know how to use their particular vision to fulfil and expand his own. 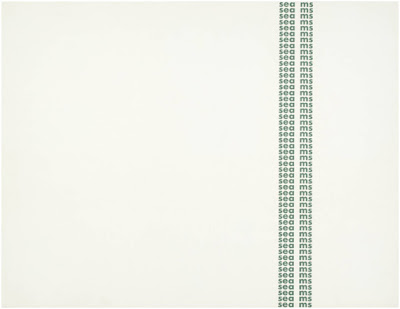 Art in Healthcare is fortunate to have six prints that span four decades. Together they showcase his characteristic wit and visual power and speak for themselves. Two of them may need further explaining. With ‘Citron Blue’ Finlay alluded to the shape of Orkney boats which reminded him of lemons with their protrusions fore and aft and to a poem by Goethe whom Finlay greatly admired. As for ‘Column Drum to Drum’ it refers to the building process of classical columns that involved stacking up drum-shaped sections. 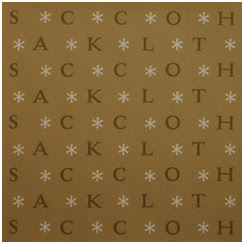 Ian Hamilton Finlay’s lifelong struggle against agoraphobia had an extraordinary conclusion. He suffered a stroke near the end of his life which reversed his phobia and allowed him to do some travelling once more.

Since Finlay’s death in 2006, Little Sparta has been looked after by his trust. The future seemed uncertain because of the high maintenance costs but it was announced in June this year that a deal has been signed with Edinburgh University (which now includes Edinburgh College of Art) that will allow scholars to use the house as a study centre. A new beginning unfolds.

Bill Hare, art historian and Chair of Art in Healthcare Board of Trustees

The Wild Hawthorn Press for their information on the prints in the AiH collection. http://www.ianhamiltonfinlay.com/wild_hawthorn_press.html

‘Ian Hamilton Finlay – Selections’ edited and with an Introduction by Alec Finlay, University of California Press, 2012.

The exhibition ‘Ian Hamilton Finlay. Poet. Artist. Revolutionary’ is currently running at the Gallery of Modern Art in Glasgow until March 1 2014.
Posted by Art in Healthcare at 08:08 0 comments

In the middle of June I set off as Outreach Manager for Art in Healthcare (AiH) to journey around some of the Highlands and Islands of Scotland. Kindly funded by the ‘Go & See’ fund, which is administered by Engage Scotland and supported by Creative Scotland, I would be away for nearly two weeks as AiH’s Ambassador on the road. My brief? To find out what is going on around some of the more remote areas of Scotland in the field of arts outreach, to learn from these organisations and share with them about AiH, and to investigate any potential new partnerships for future joint project-working.

So where did I go and what did I see
(alongside the images I snapped here and there..)?

Well, I spent 12 days driving around covering 1,210 miles, including 4 different islands and 6 ferry crossings! I also visited a wide range of services that run different arts outreach programmes from Hospitals and Drop-in/Community Centres to Museums and Galleries, meeting key people involved from Artists and an Art Therapist to Project Coordinators, Arts Officers and a Trustee.

Without exception every person I met was responsive to my mission to learn from them and to hear about AiH and, interestingly, no one had previously heard of AiH nor the range of services we now provide. For me the latter meant my trip was particularly worthwhile.

I have always valued face-to-face meetings and contact but, for me as Outreach Manager, this was what my role is about, getting out there, meeting people, explaining who we are and what we do at AiH, all with a view to building new relationships, developing new ideas and seeing our role in the bigger picture of arts and health around Scotland, above and beyond the close vicinity of Edinburgh and the 'central belt'. I was certainly rewarded for this and my trip was welcomed by people appreciating that AiH were taking the time to, quite literally, 'go and see' further afield.
Along the way I learnt a LOT; this included the valuable artist residency programmes at Sabhal Mor Ostaig, the Gallic College on Skye, and about the range of support that Atlas Arts provide to the artists of Skye and Lochalsh. I experienced the community draw of Taigh Chearsabagh as an Arts Centre on North Uist (and the cosy café), likewise the An Lanntair Arts Centre in Stornoway on Lewis with a cinema and exhibition space as well as outreach programmes for the elderly. I heard about the multiple creative opportunities provided at the Catch 23 Drop-in Centre in Stornoway and about the valuable work of a Lewis-based Art Therapist, working in schools with children who have emotional and behavioural issues.

I experienced the buzz of Ullapool’s art scene at An Talla Solais Arts Centre - connecting people with art and the Rhue Art Gallery - supporting emerging artists, likewise the active McPhail Community Centre that rolls out numerous arts projects to the local community. I went to the Kyle Centre in Tongue and the Strathnaver Museum in Bettyhill, both fulfilling impressive roles in bringing together the local community through various services and art projects. I called in at the Timespan Museum & Art Centre in Helmsdale where I heard about their interesting range of outreach work, closely based on the local heritage and I met with a freelance Arts Officer involved with Groam House Museum in Cromarty who shared her extensive knowledge and experience as an arts officer both locally and further afield. I met with Play Pieces in Inverness, a new theatre group looking to explore theatre projects in healthcare settings and then...I ran out of time. This list is just a selection (and if you are interested in names of just who I met then please get in touch on the email address below)!
Inevitably, I quickly realized as I went around that while I thought I was managing to fit in all the relevant people and organisations to see and meet, these people and organisations were invariably providing me with a helpful other list of essential people and organisations to meet! I reassured myself, however, with the knowledge that I was building up an extensive map in my head, not just a database of names and email addresses but a map of friendly faces and real stories that correlated to arts outreach around the country. Furthermore, I had been struck early on in the planning of my trip that once I started to ‘spread the word’ that I was going, people were contacting me about meeting up, as if once I’d committed to going, I was already starting to draw attention to AiH.

Essentially, the trip did achieve my aims insofar as gaining an insight into arts outreach around the Highlands & Islands of Scotland while raising awareness of AiH and our interest to expand our outreach remit beyond the comfort of Edinburgh. As I went from meeting to meeting, I really found myself closely examining the potential role of AiH in the wider context of Scotland. For example:

These questions may take a while to properly answer but I’m confident that with the help of those I’ve recently met and of those I’m yet to meet, I’m getting closer to the answer all the time..

A big thank you to those of you that met with me who generously shared your thoughts and ideas, more often than not with a cup of tea and a friendly welcome!

Do get in touch if you have any comments or thoughts about my trip on outreachmanager@artinhealthcare.org.uk or 0131 555 7638.