Born, bred and based in Edinburgh, the city features prominently in Henry Kondracki’s work, often depicted in dark and wintry nights. But his paintings are not dystopian visions of the modern metropolis. On the contrary, they are lyrical cityscapes, full of poetry and emotions where his brushstrokes playfully distort the lines of buildings to conquer their daunting mass while at the same time remaining true to their identity and features as in this view of the east end of Princes Street entitled ‘The Wellington Statue’.

‘The Wellington Statue’, oil on canvas, 133 x 150 cm, courtesy of The Scottish Gallery

Here we can see how the artist has offset the pervasive greyness with many touches of bright colours and placed the focus on the people’s resilience as they go about their daily lives despite the inclement weather.

Henry Kondracki trained at the Slade School of Fine Art in London in the 1980s. He has won many prizes throughout his career and is represented in many collections and galleries. Art in Healthcare has four of his works.

In ‘Autumn on Arthur’s Seat’ the city is seen from above and occupies most of the composition but, in complete contrast with ‘The Wellington Statue’, it is bathed in golden colours. A small figure is seating in the foreground, facing away from us towards the familiar landmarks in the distance, in harmony with nature, the city and the sky. 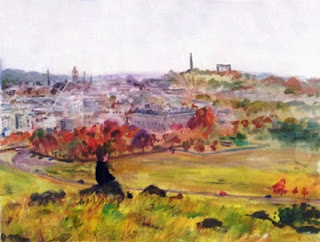 In ‘Miles and His Kite’ we recognise Kondracki’s theme of the solitary figure connected physically and spiritually with nature. This powerful Expressionist painting is set on an idyllic and deserted sandy beach and the artist has imbued the diminutive figure with the same determination displayed by his city dwellers as Giles takes control of his kite by the mere suggestion of a string. 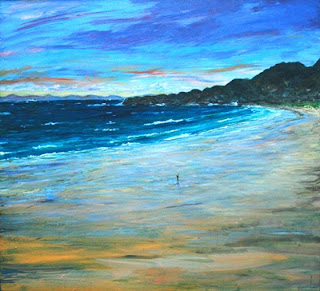 I went to see this painting in the Royal Victoria Building at the Western General Hospital. It has pride of place in the common room where patients eat and relax and it felt right that it should hang next to a glass wall with panoramic views towards the Firth of Forth. I enjoyed its depth and intensity. All Kondracki’s paintings are drawn out first and these marks soon disappear under many layers of paint that he applies with meticulous brushstrokes until he feels the work is done.

The two remaining works in the collection are both monochrome prints which illustrate the artist’s mastery of line and sense of humour. 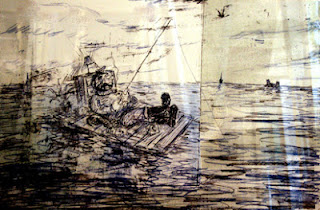 
In the course of our conversation, Henry pointed out that the fishing line in ‘Shipwrecked’ and the string of the kite represent continuity and connect not only the earth, sky and water but also time, nature, history, all the great issues which guide our transient lives.

He also explained that he is always aware of the dichotomy permanence vs. impermanence and that although his works suspend a moment in time, that this moment will last an eternity or at least several generations and will be on somebody’s wall for all that time. This is why the thought is never far from his mind, except when he is absorbed in the work, that his paintings should be as joyful, uplifting and healing as possible.

The elderly patient in the Royal Victoria common room certainly seemed to think so.

The Scottish Gallery will be showing Henry Kondracki’s 'Works on Paper' from 8 October till 3 November 2012. http://www.scottish-gallery.co.uk/artist/henry_kondracki

The Scottish National Gallery in Edinburgh is currently showing a breathtaking selection of Expressionist and Symbolist painters in the 'Van Gogh to Kandinsky' exhibition until 14 October.
http://www.nationalgalleries.org/whatson/exhibitions/van-gogh-to-kandinsky#.UD8wpcFlRKM

With many thanks to Henry Kondracki for his time and for sharing his thoughts during our telephone conversation.

Thank you also to The Scottish Gallery for the use of 'The Wellington Statue' image.


Martine Foltier Pugh is a freelance writer and visual artist based in Edinburgh.
Posted by Art in Healthcare at 12:12 0 comments

Carterhaugh and Forest Pitch, A Tale of Two Ba' Games

In the middle of the Olympic Games, I went to see ‘Playing for Scotland. The Making of Modern Sport’, the exhibition of sporting paintings, photographs and memorabilia now showing at the Scottish National Portrait Gallery in Edinburgh. I counted twenty four different sports in total, some of them hundreds of years old and many still practised today. Football is particularly well documented. I learned that it all started with the ancient tradition of the village ba’ game which incidentally is still played today in certain Scottish towns, when whole communities or parishes got involved behind two opposite sides, the ‘uppies’ vs. the ‘doonies’.
One particular ba’ game still stands out today from the rest. We are reminded of it by a small etching by James Stephanoff entitled ‘Lifting the Banner of the House of Buccleuch at the Great Foot-Ball Match on Carterhaugh’. The epic encounter between Selkirk and Yarrow took place in December 1815. Volunteers from other parishes joined the two sides until their combined numbers reached the hundreds and all marched to the site of the game to the sound of the pipes. The military feel was reinforced by the display of the Buccleuch Banner, a relic of past wars. The Duke of Buccleuch in person supported the Yarrow side while Selkirk was championed by its Sherriff, none other than Sir Walter Scott whose literary works spread his positive portrayal of Scottish identity across the world.  Scott was greatly instrumental in the organisation of the contest.
Not surprisingly, the arts were part of the proceedings and the 2000 spectators were handed out verses by Scott and James Hogg, the poet and novelist. The pitch was over one mile long with the Ettrick Water and the River Yarrow for goal lines. Selkirk wore twigs of fir and Yarrow, sprigs of heather. The game lasted more than four hours and remarkably, humour and good behaviour were maintained throughout even though betting money was at stake. Eventually it ended nil-nil, such was the athletic fitness of the men.
Almost two hundred years later, another football event is currently being organised in the Borders with the patronage of the arts. ‘Forest Pitch’ is the creation of Edinburgh-based artist Craig Coulthard and was selected to represent Scotland in the London 2012 Cultural Olympiad. The project which is supported by Creative Scotland, involved felling spruce in a commercial plantation in the Borders to make the pitch. The trees were then recycled into changing rooms, goal posts, seating and fencing. 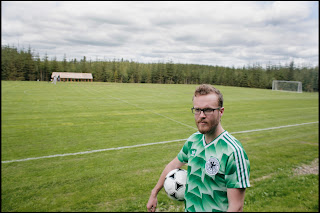 Craig Coulthard in front of the pitch
picture by Angie Catlin, courtesy of 'Forest Pitch'

Two matches are to take place bringing together four amateur teams, two male and two female with many of the players having recently arrived to Scotland from various parts of the world and all will be wearing strips designed by schoolchildren. After the event, the pitch will be planted with native trees as a lasting reminder. 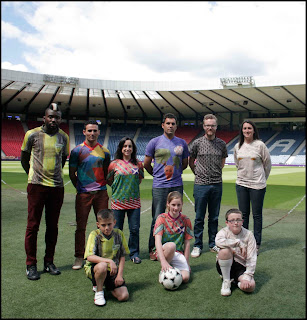 Coulthard’s inspiration evolved from his memories of playing football as a boy in a forest in Germany where he grew up. He has been closely involved with the games and the players but will not be taking part in the matches and, as a keen amateur footballer, finds it difficult to resist kicking the ball when watching the practice sessions. He explains that although he was aware of Scott and Hogg neither men nor their work have a direct influence on his work and that the Carterhaugh Ba’ just happened to be a wonderful coincidence. I see in what similarities there are between the two, a heartening sign of the continuity of the Scottish spirit and identity.
The Cultural Olympiad got under way in 2008 and like the Olympic Games it has involved and inspired millions across the UK. ‘Forest Pitch’ is a celebration of Scotland’s cultural diversity, its passion for ball games and the spirit of amateur sport.  It also shows that when the arts and sports come together, anything is possible!

For information:
The ‘Forest Pitch’ games will take place on August 25 and tickets are available from the ‘Forest Pitch’ website. www.forestpitch.org/
The Buccleuch Estates at Bowhill are considering a re-enactment of the Carterhaugh Ba’ game in 2015 to mark its bicentenary. www.bowhill.org

Credits:
With thanks to Craig Coulthard for his information and images and to Matthew Shelley of ‘Forest Pitch’ for his images.