The eight prints by Elspeth Lamb in the AiH Collection span three decades and altogether encapsulate the internationally renowned printmaker’s diverse repertoire of silkscreen, collage, lithograph, screenprinting and papermaking.
The titles March Hare, Miracle Fish and Milagro give us an inkling of Lamb’s predilection for fairy tales and enchantment and this is indeed confirmed unmistakably by the allusion to Alice’s Adventures in Wonderland in the cover image of her website and by the artist’s long blond hair that echoes the famous golden locks. Motifs from Lewis Carroll’s classic novel recur in Lamb’s iconography, not only the hare but also the ubiquitous ellipse, sometime egg, sometime mirror. 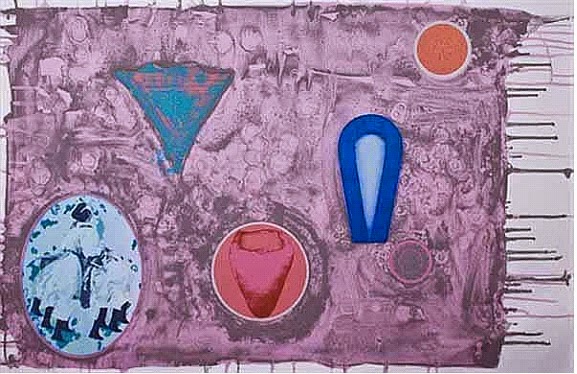 These references to Alice seem most appropriate when you consider that it is the privilege of artists to cross over two worlds, the mundane and the extraordinary and to take the viewers through the looking glass into the land of dreams. And as in Alice’s story, there is a certain frisson of danger in Lamb’s make-believe art with appellations like ‘chimera’, ‘Les Fleurs du Mal’ and ‘cantrip’, the Scots word for magical spell.
Printmaking is steeped in rituals and processes. But for printmakers, the exacting nature of their methods is not limiting but opens up an ever-increasing array of possibilities the more skilled they become. 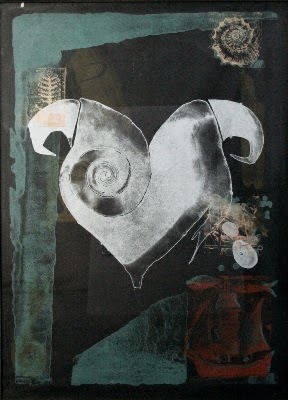 Elspeth Lamb is an expert in her art form which she taught for over twenty years at Edinburgh College of Art, latterly as Head of the Printmaking department. Then in 1999 she left college to embrace a freelance career, a momentous decision that allowed her to divide her time from then on between her own practice and teaching through workshops.
Travels had always been important to her work and she was now able to spend even more time abroad at the invitation of art institutions. Japan held a particular fascination for her and in 2000 she got the opportunity to immerse herself in its culture when she was selected for an international residency programme. She spent ten weeks in the village of Nagasawa and turned the tables on herself by becoming the pupil of master craftsmen to study moku hanga, a water-based method of woodblock printing that produces stunningly vivid and transparent colours.

She returned to Japan two years later to learn traditional papermaking as part of her research for a book she had been commissioned to write which was subsequently published in 2006 under the title Papermaking for Printmakers.  Lamb called upon a number of experts to work with her on this very detailed handbook and in her introduction she explains eloquently the seduction and rationale of papermaking that she describes as “a tactile revolt against the limitations of the flat, one-dimensional print”.
Physically challenging and time consuming, it is also enormously rewarding because the artists can add to the pulp specially chosen elements that evoke places and emotions through touch and smell as well as visually. The end result is two artworks in one, the paper and the print which complement each other perfectly, layers upon layers.

Inspired by her two visits to Japan, Lamb produced in 2006 an artist’s book Nagasawa Cantrips. In this limited edition of ten, the artist has conjured up the best of her skills to bring together traditional and modern printing methods, Western and Eastern thinking and her favourite themes. March Hare and Miracle Fish are two of a few prints that were produced separately and that can be enjoyed today by the patients, staff and visitors of the healthcare setting they enhance.