In many ways Duncan Pettigrew was a typical adolescent full of youthful enthusiasm and confidence. Art was his passion and although his most productive period only spanned a couple of years, he left behind enough works to fill up several gallery spaces. 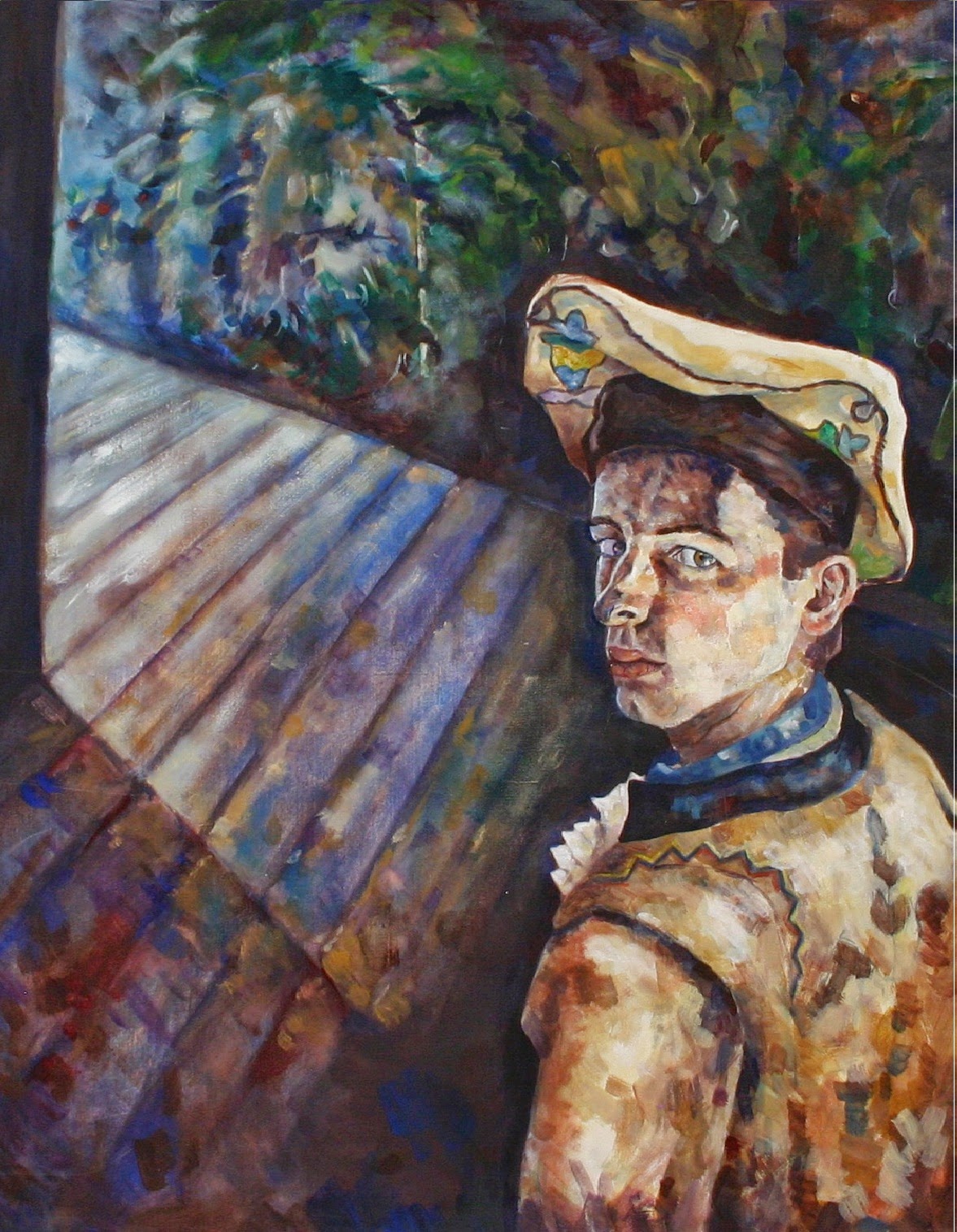 His numerous self-portraits show a young man looking straight at the viewer, not with arrogance but with the assurance that befitted the accomplished draughtsman that he was. The word ‘extraordinary’ comes to mind when describing the extent and range of his talent. John Brown who taught him in fifth and sixth year at Edinburgh Academy in Edinburgh and himself a renowned artist was impressed by his technical ability at such a young age.
The wealth of details in his works reveal to us his sharp observation skills and his delight in putting together carefully conceived and balanced compositions livened up with boldly contrasting light and dark tones for dramatic effect. 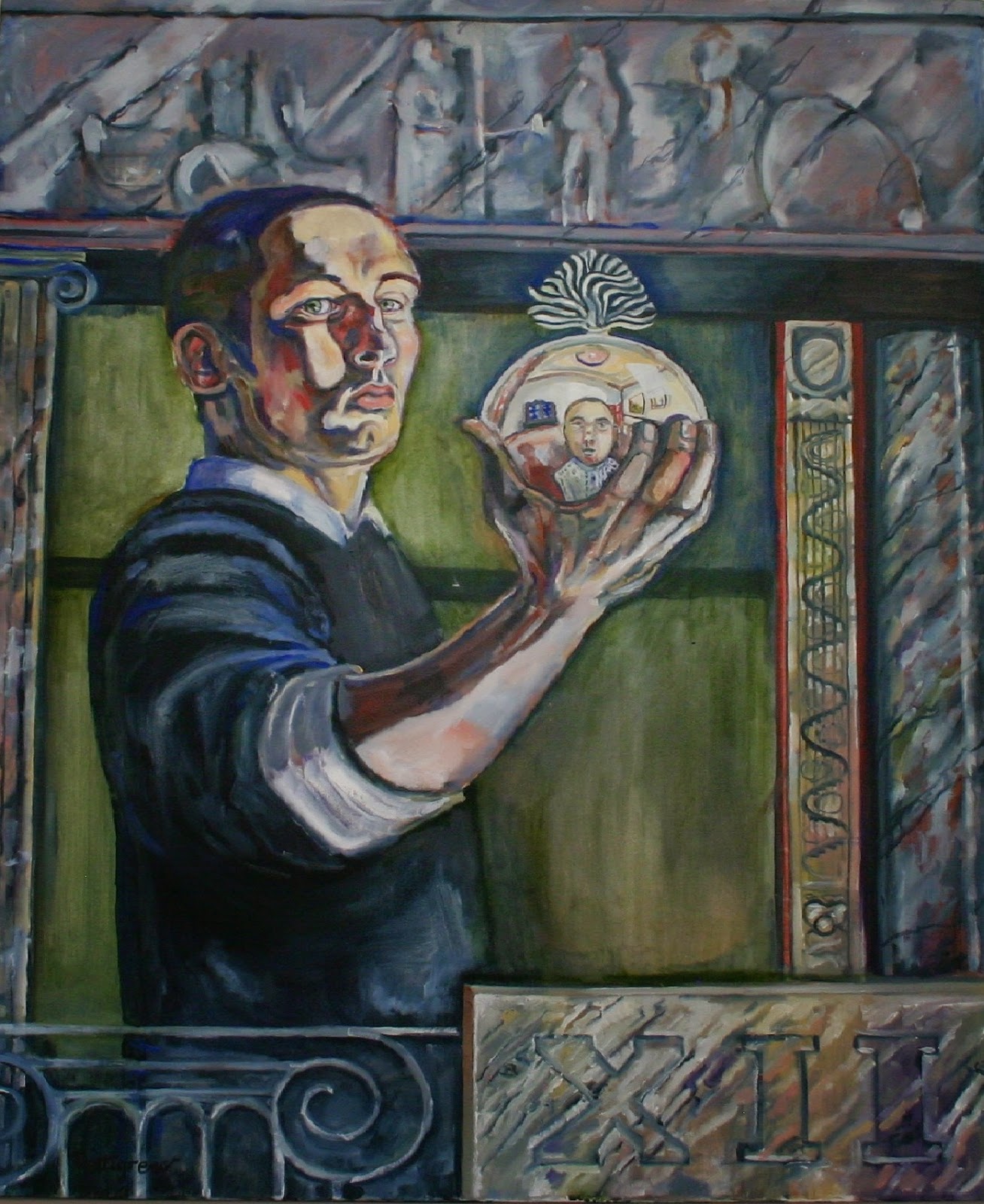 Self-portrait (with trophy)  oil, 110x76cm
(aged 17 when at Edinburgh Academy,
inspired by the award of the Burness Trophy for Painting)
image courtesy of J and M Pettigrew

Duncan may have inherited his aptitude from his artistic parents but his competence was entirely his own and earned through fervent practice. He was constantly drawing and his sketchbooks show how he learnt about the way things connect and relate to one another:  the front door to their house, the large cheese plant sprawling up the banister, the florid wallpaper in a holiday home abroad.
This fusion of eagerness and talent gave rise to the prodigious pace that defined his working process. His father recalls that in the time it took him to do half a drawing, Duncan would do four or five. 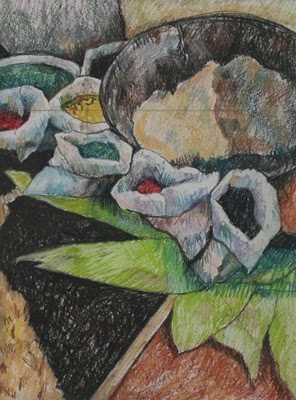 He had been accepted by Glasgow School of Art when he was diagnosed with leukaemia. After his first stay in hospital, he surprised everyone by producing seven large self-portraits within a week, each one named after the day it was completed. This series of charcoal drawings shows his keen sense of humour as in Sunday where he drew himself wrapped up in toilet paper, the one thing that was close at hand and in abundant supply. His art became his way of thumbing his nose at his illness.
While in hospital he received a visit from John Bellany who was a friend of his mother from art college. Bellany gave him a large compendium of Picasso’s works with the hand-written dedication “Love your Art”.
Duncan spent the following year at Leith School of Art (LSA). In this nurturing environment and with renewed strength, he was able to enjoy this most creative time to the full and never wasted one moment. Typically the four studies in the Sack Series currently with Art in Healthcare were executed as a single studio assignment. 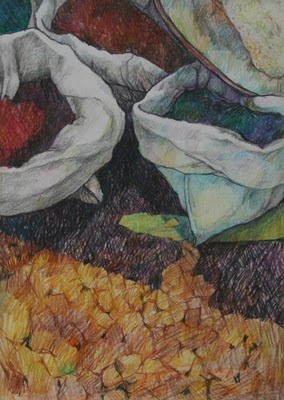 LSA principal Philip Archer who taught him, remembers clearly not only his talent but also his strength of character and clarity of thinking beyond his years and of course his sense of humour. He recalls that Duncan worked hard and wanted to be pushed hard but at the same time that he did not take himself too seriously and held on to his achievements lightly.
In 1994 Philip Archer and the Pettigrew family put together a show to celebrate Duncan’s artworks that filled the walls of LSA. A book entitled Love your Art accompanied the exhibition and helped raise money for the Leukaemia and Bone Marrow Transplant Fund at Edinburgh Royal Infirmary. 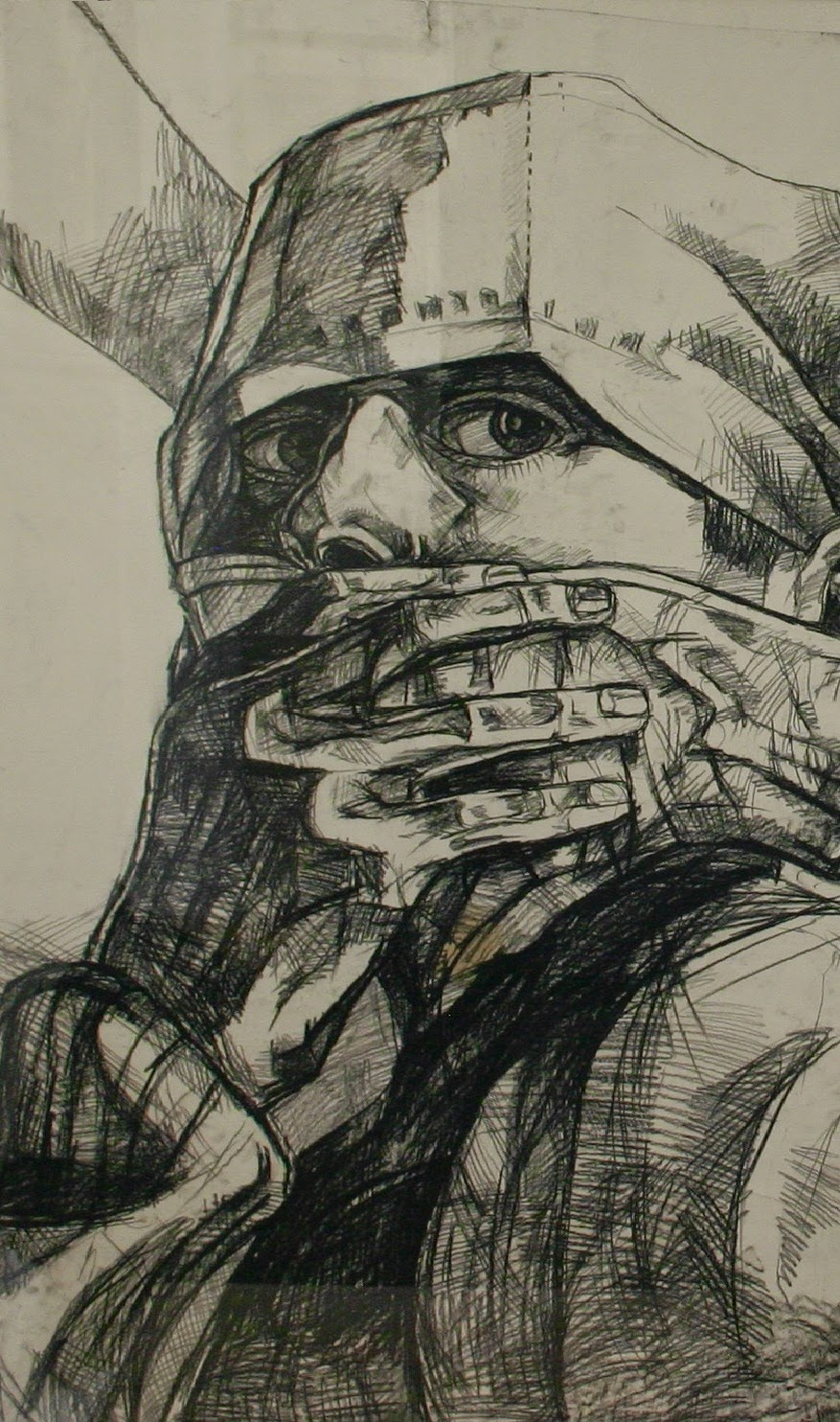 Duncan’s talent and fortitude inspired all those who came across him and this extract from a poem by Dylan Thomas that Philip Archer appended to his foreword to Love your art is a particularly fitting tribute to this remarkable artist:

“Do not go gentle into that goodnight,
Rage, rage against the dying of the light.”

With thanks to Jennifer and Maurice Pettigrew and to Philip Archer.
With thanks to Soosan Danesh for photographing the self-portraits above.

Love your art is available for borrowing from Edinburgh libraries.