Adrian Wiszniewski apologises for the mess as he opens the doors to his studio conveniently built in the garden of his house on the outskirt of a tranquil Renfrewshire village. This is in fact a very well organised series of working spaces designed to accommodate large scale paintings and small detailed watercolours. 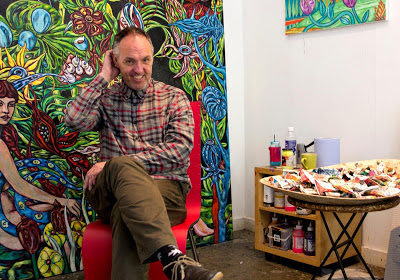 Many people will be familiar with Wiszniewski’s figurative paintings of pensive youths engaged in mysterious pursuits. The figures are formally poised often against exuberant landscapes of sensual, luscious flowers and fantastic birds, flooded with vivid colours interspaced with large expanses of black. The overall feel is of suspended animation. 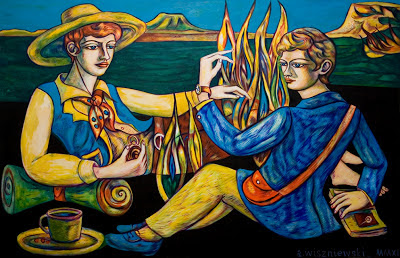 Wiszniewski relates his group paintings to the ‘Attitudes’ of Lady Hamilton, the 18th century beauty who became famous in Naples for her living pictures where she posed as characters from Antiquity. His figures are indeed actors, or metaphors, that allow the artist to explore poetically certain issues. Their features are composite and this hybridity indicates their creator’s internal argument. But the debate needs no resolution. Wiszniewski likes to keep things open-ended, this is what sustains his excitement for his work. 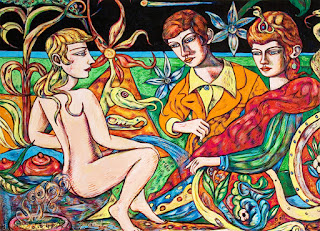 He chooses to depict his characters on the brink of action because of the innate potential concentrated in that moment. For instance he prefers the loaded tension of Michelangelo’s sculpture of ‘David’ to Bernini’s contorted and spent hero.
Adrian Wiszniewski was born of Polish, Irish and Scottish parentage and brought up in Glasgow. Although happy to have been born in Scotland, he has always felt more European than Scottish. He first studied architecture at the Mackintosh School of Architecture before taking up painting at Glasgow School of Art (GSA) in the 80s. He finally graduated in mixed media with filmmaking. European and American art together with performance artists such as Bruce Mclean and Gilbert & George, these were the early influences that inspired his distinctive take on the figurative. 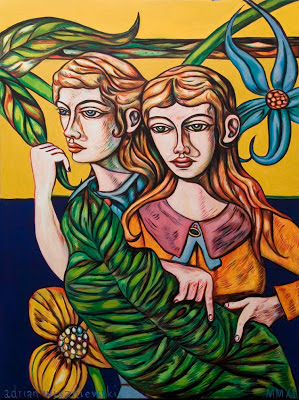 He left Glasgow soon after graduation to see the world and partly also to break away from the Scottish art scene and the ‘New Glasgow Boys’ label that had brought early fame to himself and his GSA peers Steven Campbell, Ken Currie, Peter Howson and Stephen Conroy. Wiszniewski went on to build an international reputation with solo exhibitions and many prestigious public commissions.
He has been back in Scotland with his family for a number of years and continues to defy categorisation by successfully mastering new practices in parallel with painting:  printmaking, ceramics, interior design – he designed the chair in his studio. He is also an acclaimed writer and playwright. The reason why he does not take up photography is simply because he would have to master it to perfection and there would be no time for anything else! 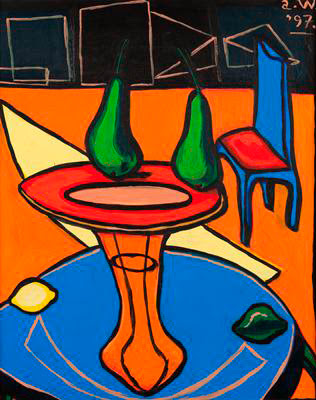 Fruit on a slice of lemon  1997, acrylic on canvas, 90x75cm
Art in Healthcare collection

Interestingly the painting in the Art in Healthcare collection is not figurative. It was commissioned in 1997 particularly for a hospital environment and the brief specified “no black” because it is a “depressing” colour. Typically Wiszniewski thought otherwise. After all “Manet, Matisse, Chagall and Picasso all have a fantastic use of black” he adds. His appreciation of Matisse is particularly strong here with the flat planes of bold colours. Adrian Wiszniewski’s sense of humour comes through in the title, the slice of lemon in question is the pool of yellow on the floor.

With many thanks to Adrian Wiszniewski for his time and hospitality.