In July this year the Royal Edinburgh Hospital (REH) will be two hundred years old. Its bicentenary is marked by an ongoing series of events and lectures that highlight its history.

To trace the contributing factors which led to the creation of the REH, we have to go back to
a particularly tragic incident in 1774. 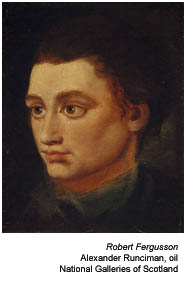 At twenty-four, Robert Fergusson was already a much admired and established poet whose brilliance thrilled the crowds in pubs around Edinburgh, the ‘Auld Reikie’ of his poem.

Today his statue outside the Canongate church still entertains as it appears to be hurrying past visitors to the Royal Mile.

Already prone to bouts of ‘melancholia’, his condition worsened after a head injury incurred in a fall.

Soon it became too difficult for his mother to look after him. If Fergusson’s family had been well off he would have been sent to a private institution at great expense. But for ‘paupers’ the only option was the Bedlam asylum where treatment was non- existent and restraint prevailed.

Fergusson’s health deteriorated fast and he died two months later. The circumstances of his death had a lasting effect on his friends and followers such as Robert Burns who publicly acknowledged his influence. 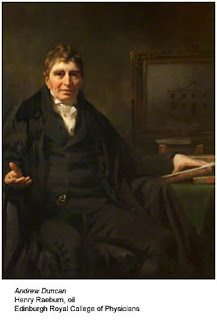 One of Fergusson’s friends was Dr Andrew Duncan who visited him in Bedlam. Duncan was so outraged by what he saw that he resolved to improve the conditions of so-called ‘lunatics’.
He set about to raise support and funding for the creation of a humane asylum but despite his efforts and the prominence of his position - he was President of the Royal College of Physicians for a number of years - progress was very slow. But he did not give up although it took eighteen years to appoint trustees and another fifteen for a Royal Charter to be granted to him by George III. Finally sufficient funds were secured and in July 1813, thirty nine years after Duncan conceived his plan, the ‘Edinburgh Lunatic Asylum’ opened its doors to its first fee-paying patients in the village of Morningside south of Edinburgh. Provision for non-paying patients would have to wait longer still until the 1840s.


These beginnings seem very modest by today's expectations but they were ground breaking at the time and greatly influential in shifting the perception of mental disorders from crimes to illnesses. 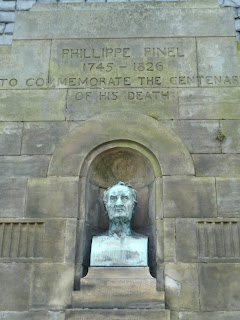 Other pioneers were emerging in England
and Europe, for instance William Tuke in
Yorkshire and Philippe Pinel in France,
who advocated replacing chains with
humanity and compassion in the care of
the so-called insane.

So inspirational were Pinel's ethics to the
inaugural Board of Management of the
hospital that a plaque portraying him as a
younger man was embedded in the fabric of
the building as well as his bust as an older
man to commemorate the centenary of his
death. From this high viewpoint he can still
oversee the hospital's comings and goings.


During the nineteenth century, two long-serving hospital superintendents were highly influential in asserting the reputation for innovation of the REH. Dr William Mackinnon believed that patients should be kept busy and that their work should reflect the skills they had before coming to the asylum, tailoring, weaving and gardening for example.  We now recognise in these principles the basis of modern Occupational Therapy. 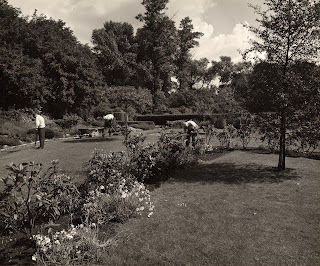 Dr Thomas Clouston raised the standard of hospital attendants by improving their pay and education. He also modernised the existing hospital units and expanded them by pushing for the purchase of neighbouring land. 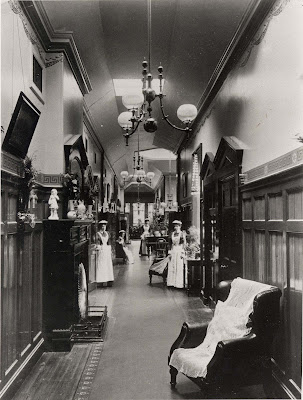 
The memory of these and other pioneers is kept alive today with the preservation and display of their painted portraits and commemoration plaques and with the naming of buildings and wards around the hospital. There is something heartening about the thought that the principles of the Enlightenment that started it all can still inspire the future generations of carers and practitioners two hundred years later.


With many thanks to
Tom Arnott, REH Operations Manager, who took the time to give me a guided tour of the hospital and brought its history to life
Lothian Health Services Archives (LHSA) for providing digital documentation.
The LHSA have launched a Royal Edinburgh Hospital Appeal for photos, letters and any other documents ranging from the 18th century to the present day
www.lhsa.lib.ed.ac.uk


For details of the remaining lectures in the Bicentenary series:
www.lhsa.lib.ed.ac.uk/home/REHBicentenaryLectureSeries.htm


Don't miss out on any of our forthcoming blog posts. Subscribe by email address at the "Follow us by Email" above right and receive notifications when we make a new entry.

The next 'Artist Uncovered' blog
will be on Adrian Wiszniewski
Posted by Art in Healthcare at 12:27