David Michie hardly needs ‘uncovering’. His successful career as an artist and educator spans some sixty years, he has works in international collections, is affiliated to the major British art associations and credited with many distinctions and awards.  I am slightly intimidated at the thought of meeting him but this feeling is soon dispelled, the master is also a charming man.

When entering his studio, I cannot help but remark how tidy it is with rows of paintings neatly stacked against the walls. He assures me this is quite unusual and due to a recent cataloguing exercise he carried out with the help of his daughter. I also notice the many paints and brushes on the table next to the easel. 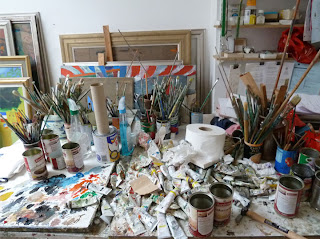 Perhaps this allusion to order prompts David Michie to start by saying that he has never had what we call today a career path, he simply reacts to what he sees. His inspiration comes from chance observations made for instance while relaxing with family and friends. The cyclists who rode past him at the cafe terrace in Spain reminded him of Assyrian statuary with their taut facial expressions and elongated helmets, the cloud of shimmering damselflies he came across during a family picnic and the contrast between man-made linearity and the undulation of plants he observed while strolling through his friends’ garden, not just any friends but John Houston and Elizabeth Blackadder, all spawned new series of works.

He has always carried a small sketchbook in his pocket to draw and write down his observations on the spot during his many travels abroad or while walking around Edinburgh. These notebooks are stacked on a small table and are classified in such a way that he can immediately retrieve the drawing that illustrates the point he is making. As he leafs through the pages, his favourite motifs emerge: insects, orchids, plants, cyclists, skateboarders, dancing couples all beautifully drawn with linear pen strokes. 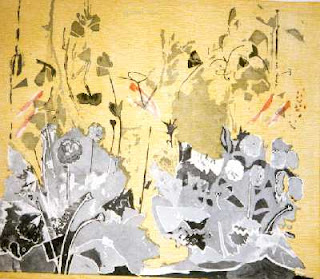 When describing these motifs, David Michie’s passion for colours and spectacle shines.  He spent the first six years of his life in St-Jean-Cap-Ferrat, an exclusive resort on the French riviera where the young David revelled in the Mediterranean sun and joie de vivre. The Michie family’s stay in the south of France between 1925 and 1934 when they returned home to the Scottish Borders, has all the ingredients of a novel: an American millionaire, a palatial villa in need of upgrading, a talented architect and artist in residence (his father James Michie), and the abrupt ending when the millions disappeared in the Wall Street Crash. But for a few years the three Michie boys (David and his two older brothers Alastair and Lindsay) led an idyllic free-roaming existence on the estate, looked after by their mother who would become later the celebrated painter Anne Redpath.  We can imagine the inquisitive little boy discovering the natural world around him, the lyrical sensitivity of later years taking shape in the artistic ambience fostered by his parents. 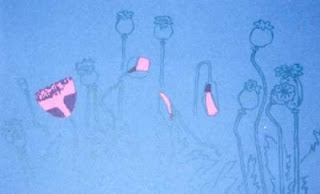 He also recalls the excitement that the arrival of street entertainers to St Jean created in the household, how he enjoyed their acrobatics and the carnival atmosphere and how years later, during the Edinburgh Jazz Festival, he would follow the bands from the High Street down to the Grassmarket with the same enjoyment, capturing the moment in his notebook. He once went to see the Argentinian dance company ‘Tango Pasión’ when they came to Edinburgh and, even in the dark, managed to make annotations that he used later to compose his witty paintings of dancing couples. 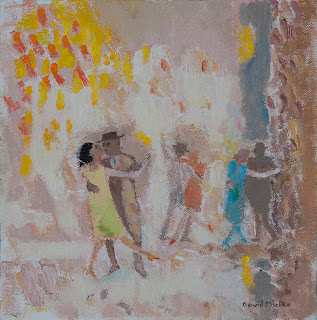 The Dance Hall, Afternoon oil on board, 20x20cm
image courtesy of The Scottish Gallery

These direct notes are indispensable to the realisation of his creative process. David Michie describes his art as “a poetic response to what I have experienced” after the famous quote from William Wordsworth, the Romantic poet, who defined poetry as “the spontaneous overflow of powerful emotions recollected in tranquillity”. When back in the seclusion of his studio the painter’s emotions go through their final transformation into artworks that he describes as “a marriage of his inspiration and the painting composition that have to be authentic in the language of painting”.

This summer, the Scottish Gallery curated an exhibition entitled ‘The Michie Family’ which brought together works by his mother Anne Redpath, his father James, his brother Alastair and some of his own paintings. When I ask if this retrospective brought any surprises, David Michie confides that he had never thought of his relatives and himself as part of a quartet before as they all came to painting from different directions. I wondered if the reunion of the works might have revealed some shared trait, the way blood relations that have been separated all their lives turn out to display similar mannerisms. After pointing out that any resemblance between the four comes from the particular thinking of the time that is common among contemporaries, he reflects that perhaps there is a certain shared temperament between them and a structure that comes from training and discipline. 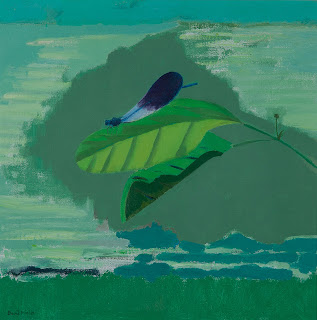 Damselfly on a Leaf oil on canvas, 38x38cm
image courtesy of The Scottish Gallery

The minutes fly quickly in the company of David Michie but after over an hour, it is nearly time for me to leave. We talk about the work of Art in Healthcare and look at his works in the collection. He reminds me how things have changed since the time when hospital walls were kept bare to avoid dust.

As to the artworks we can expect to see in the future, he showed me a series of prints made from recently rediscovered copper plates he etched in the 1980s during a visit to Belgrade where he felt completely disorientated because all the street signs were in Cyrillic. This cultural shock had the effect of sharpening further still his sense of observation. The plates were cleaned up and the prints are as fresh today as when they were new. I am spellbound as he flips over print after print of wonderful black and white streetscapes, displaying his characteristic wit. This show should not be missed when the time comes.

... in addition, I spoke to David Michie since our meeting and he mentioned what a pity it was that we had not talked about the French cineasts Marcel Carné (‘Les Enfants du Paradis’) and Jacques Tati (the Mr Hulot series) and the photographer Henri Cartier-Bresson who all had a great influence on him. Well, there is enough material here for another blog...

thank you also to Elizabeth Wemyss of The Scottish Gallery for the use of their images.