By mid-December this year, the Public Catalogue Foundation (PCF) will have uploaded the last remaining painting of approximately 210,000, by some 45,000 painters and spanning 800 years to complete this colossal project started in 2003. During that time the PCF have been tracking down, photographing and cataloguing all oil, acrylic and tempera paintings held in the public domain across the UK. The inclusiveness of this project on a national scale is unique. Unlike other online resources, the PCF catalogue includes all artworks, the great ones and the lesser ones. As many as 80% of these paintings are normally out of sight and most of them have never been photographed before.

To make this huge database available online the PCF sought the partnership of the BBC which created the website ‘Your Paintings’ where everyone can access it freely since its launch in 2011. 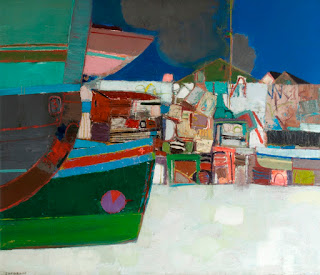 The chronicle of the PCF work over the last nine years is as remarkable as its final achievement.

The story goes that its existence was born out of frustration. While visiting a county gallery, art enthusiast Frederick Hohler was told that no catalogue existed of their entire collection, so he simply decided to do something about it. The PCF was launched as a not-for-profit charity funded mostly by private grants and donations with less than 15% coming from the public sector. Its total cost on completion will be just under £6m. Its systematic search for paintings region by region has covered not only art galleries and museums but also a lighthouse, fire stations, libraries, community centres, and of course hospitals and care homes which is how Art in Healthcare (AiH) became involved.

As one of AiH volunteers I was able to catch a glimpse of the process involved and of the dedication of those working on the project when I answered a call to go and help Elspeth Mackenzie, their collection manager, on a photo shoot for the PCF in a couple of hospitals in Edinburgh. There I met the local PCF team, Laura Walters, the coordinator and Andy Phillipson, the fine art photographer. 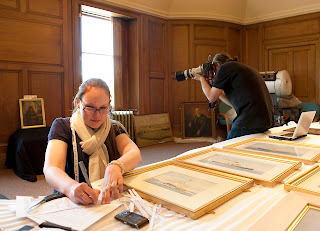 Laura, a researcher and art historian and one of 50 PCF regional coordinators, had the task of making the initial contact with the collections. As well as collecting and assessing all data, she planned the cataloguing exercise according to the artworks location. She describes the process as ‘remarkably straightforward’, a statement which does credit to her organisational skills and unflappable calm. The fun part for Laura was visiting so many different places from the residence of the First Minister of Scotland to Edinburgh Zoo, she explains: “One of my favourite locations was Brodie Castle in the Highlands. It is part of the National Trust for Scotland, and it seemed that around every corner was another masterpiece. It took 7 or 8 days in total to catalogue the painting collection there, and it was a real treat to see everything on offer.”

At the photo shoot, the volunteers were divided into two groups, one would accompany Elspeth along corridors and wards to fetch the paintings that could physically be carried to the makeshift photographic studio and the other would assist Laura and Andy with the photographic process.

Paintings in public spaces have to be glazed for protection. This creates a reflected glare which can be prevented by two people holding a length of black cloth at strategic angles determined by the photographer often perched on a chair or a table. When paintings are too large to be taken down, they have to be photographed in situ. The challenge that this presents in busy public places makes Andy even more determined to get it right:

“It always gives me extra satisfaction to get a good photograph of an awkwardly positioned artwork and one particular piece stood out when Laura and I were shooting at a treatment centre in Edinburgh. It became evident quite quickly that the only way to get the shot was to stand outside of the building and have the doors electronically held open whilst I shot back through them and onto the wall using a 400mm lens. I remember only having a few centimetres spare to get a clear shot and also a few minutes before the heavens opened and so felt extremely lucky to get the perfect photograph.” 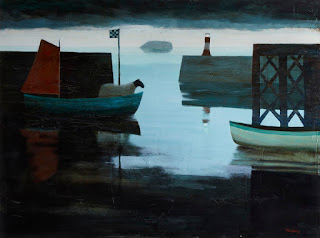 Back in his office, Andy would process the raw digital images into catalogue-ready files and forward them to Laura who would finalise the paintings data before passing them on to the PCF headquarters in London.
Because of its inclusive nature, the PCF catalogue represents an invaluable tool for the free use of individuals and educators such as Stuart Bennett, the head of the School of Art at Edinburgh College of Art (ECA): “The PCF initiative is an excellent resource for all those involved in education or interested in the work in public collections. ECA are working proactively using collections as a way of extending understanding through curation and practice."

With only a few weeks left, the PCF team in London are pulling out all the stops to meet their deadline as well as organising the tagging programme where members of the public are invited to tag paintings on the ‘Your Paintings’ website, to conclude this most democratic and revealing portrait of the UK, of its regions and institutions.

The website ‘Your Paintings’ is compelling. It will sharpen your awareness for artworks that might otherwise be taken for granted. In the words of Andy Phillipson: “The breadth and size of the Art in Healthcare collection through hospital wards, rooms, corridors and care homes is quite staggering and I can’t imagine how these places would look without it.”

What will the PCF do after December?  First they will be completing the publication of the 40 regional printed catalogues while maintaining and enriching the website and then, it is rumoured that, funding permitting, they will be turning their attention to sculptures. We look forward to that.

With many thanks to the following people for their time, contributions and information:

Alice Payne and Laura Marriott from the PCF London head office
Laura Walters and Andy Phillipson from the PCF in Scotland
Stuart Bennett from the School of Art, Edinburgh College of Art

Email ThisBlogThis!Share to TwitterShare to FacebookShare to Pinterest
Labels: 'Your Paintings', Art in Healthcare, Brodie Castle, Edinburgh College of Art, Edinburgh Zoo, the BBC, the First Minister of Scotland, the National Trust for Scotland, the Public Catalogue Foundation