Rabbie's Tours to the Rescue! 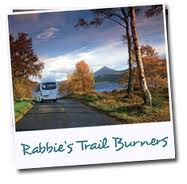 When curator Trevor Jones needed to collect four artworks from Skye, he turned to the online phenomenon Twitter for help. The desperate charity worker tweeted his plight and within minutes Rabbie’s Tours rolled in to the rescue. Trevor Jones works for Edinburgh-based Art in Healthcare. The charity lends original artworks to hospitals all over Scotland. Last week they received a call from Dr McKinnon’s Memorial Hospital on the Isle of Skye. “The hospital wanted to return some pictures to us as their loan period had ended,” explained Jones. “I was facing a round trip of almost 500 miles and being away from work for two days to collect them, or the hospital was going to have to pay a lot for a courier. It was a long way to go to collect four pictures, so I sent out an SOS on Twitter.”

Almost immediately Rabbie’s Tours, who run small bus tours all over Scotland, had replied. “Rabbie's Trail Burners was the first to develop small tours for independent travellers. We aim to minimise the environmental 'footprint' left by our customers and maximise the economic and social benefits to local communities. We go to Skye every week, so it was no problem to help out a local charity in this way.”

By Friday the four pictures, which included work by internationally collected Scottish artists Barbara Robertson and Jila Peacock, were safely back in Edinburgh.