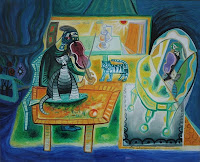 Art in Healthcare have been kindly given new painting acquisitions from Norma Drummond, the wife of Les Drummond. Many thanks to Norma for her generous contribution.

Born in Edinburgh, Drummond served in the R.A.F., 1940-46. His love or art led him to study Drawing and Painting at Edinburgh College of Art, 1950-54 and at L’Ecole des Beaux Arts, Paris in 1955. After living in London, he returned to Edinburgh to continue painting and studying until he became a teacher of art with Lothian Region, 1965-85.

During these years he produced numerous paintings of landscapes and mythical themes with poetic figures, birds, animals and horses. In the 1970’s and ‘80s he turned his creative talent to metal sculptures, using arc welding in mild steel with horses, birds and figures dominating his work. Ager retiring from teaching, his work moved into a more creative style with poetic, imaginative, dream-world thoughts on figure painting, while his colours became more intense and vigorous, as show in his later work in the 1990’s.

Les exhibited paintings and sculptures in many Edinburgh galleries, including the RSA, SSA, City Art Centre, English Speaking Union, Commonwealth Institute, Kingfisher Gallery, Torrance Gallery and Hanover Fine Arts, where his memorial exhibition was held in 1998. Since 2004, a photographic record of his metal sculptures has been held at the archive of the National Museum of Scotland.