“All the wonderful things that happen through the commonplace”


Art in Healthcare included no less than three paintings by David Michie in their relatively small but perfectly formed 2014 Festival exhibition ‘The Healing Power of Art’, such is the enduring appeal of the renowned artist. 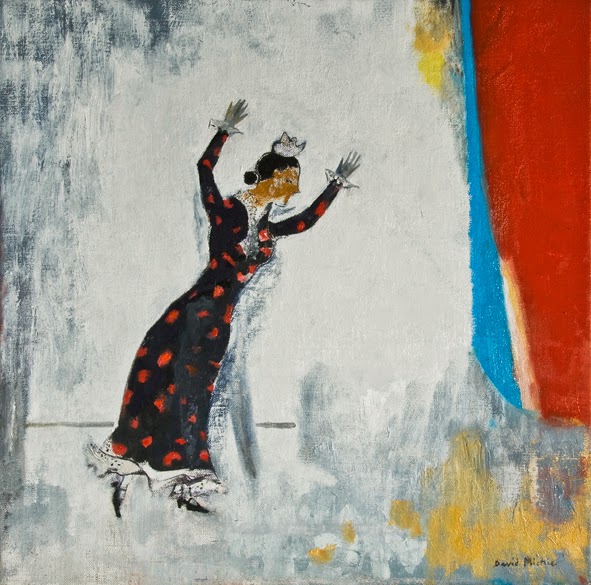 When I first interviewed him two years ago Michie talked about his early years spent in a small village on the French Riviera with his artistic parents and two brothers, where the bright colours and ambient zest for life helped shape his love of nature and his outlook on the world and on life. He also showed me the dozens of sketchbooks where he recorded his observations, a lifetime of visual data.
At the end of that first meeting he mentioned the influence that French cinema had on him as a young man but we had ran out of time so it is with keen anticipation that I revisit him to talk further about this and other sources of inspiration. 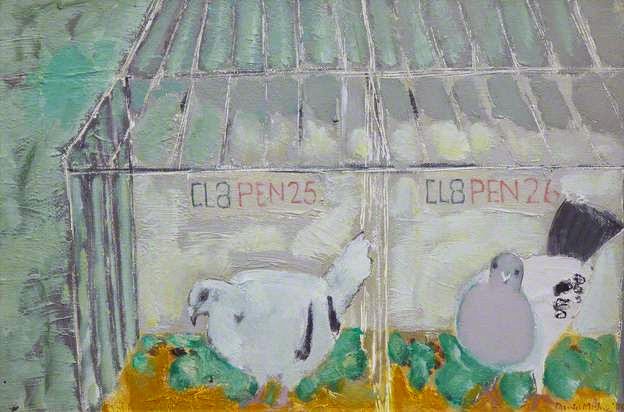 He recalls how as a young art student in Edinburgh, he was encouraged by his tutors to go to the National Gallery of Scotland and look up the great masters to help him decide what theme would define his practice. Although he admired them, the young Michie struggled to engage personally with the grand social and political topics of the larger than life dramatic compositions by Rubens or Poussin. Instead he was much more drawn towards the recently released films from France and Italy shown at the independent Cameo cinema, a welcome and exciting change from the staple diet of American and British films that dominated all other screens in the late 1940s when television sets were still a rarity.
He immersed himself in the neorealism of films like Marcel Carné’s Les Enfants du Paradis which he watched at least fifteen times or Marcel Pagnol’s Marseilles trilogy and other masterpieces by Roberto Rossellini or Vittorio de Sica. 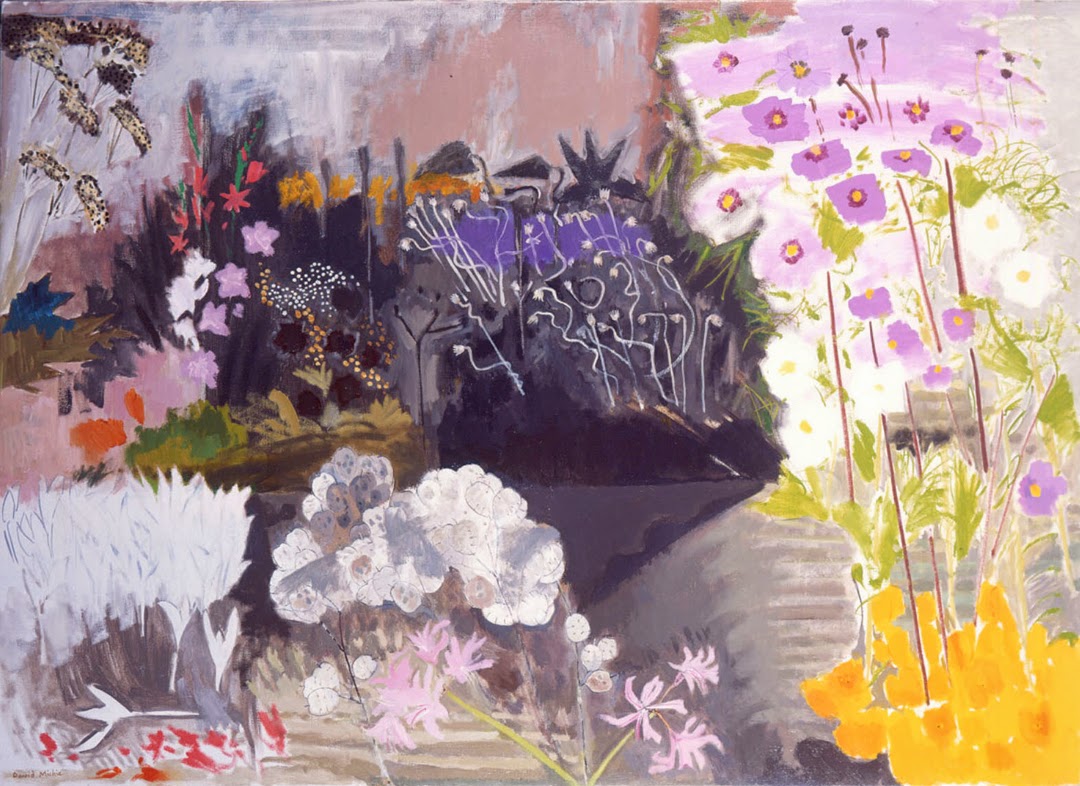 These cinematographic encounters all contributed to Michie’s realisation that his interest lay, not in grand historical paintings but in the beauty of the everyday observed at first hand, the view from his window, the racing pigeons shown by miners at a local Pigeon Fancying fair, a bunch of flowers in a jug. He sums it up by quoting Paul Sérusier, an influential French painter of the turn of the twentieth century, who said “It is the role of the artist to see the significant in the ordinary.”
Not surprisingly he also felt much more drawn towards the hedonistic interiors of Pierre Bonnard and Raoul Dufy or Henri Matisse’s sensuous odalisks than towards the raw emotions exuding from the works of British artists of the latter half of the twentieth century whose penchant for pathos he sees as a throwback to Puritan times. 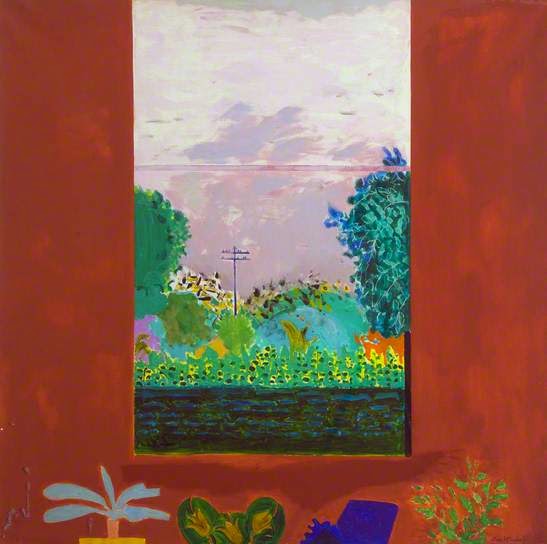 This preference for informal and organic compositions was further confirmed to him one significant summer day while walking around his friends John Houston’s and Elizabeth Blackadder’s garden when he was bowled over by nature’s riotous colours and proliferation that pushed back the man-made backdrop of geometric trellisses. This revelatory moment was all the more compelling because he had been engaged for some time in painting severe compositions. It was to influence his whole practice and inspire many plant portraits not out of interest in botany but as a lover of nature, in his own words, “rhyming shapes, rhyming colour”.

This idea of capturing the moment brings us to the photography of Henri Cartier-Bresson. Michie explains that the impromptu appearance of his photographs was in fact the result of hours spent at a particular spot waiting for that brief second, “anticipating that something was going to happen, much like a tiger ready to pounce” he adds. Cartier-Bresson was also a purist who would present a final image, probably one of many rejects, unadulterated and framed exactly as it had been shot.
Paradoxically there rests the connection between the two artists as Cartier-Bresson’s long drawn out creative process is in fact the reverse of Michie’s own painstaking method of painting that he describes as “a sum of corrections” based as it is on many marks, scraped and painted over time and time again until he has achieved the air of fortuitous and effortless spontaneity that typifies his style. 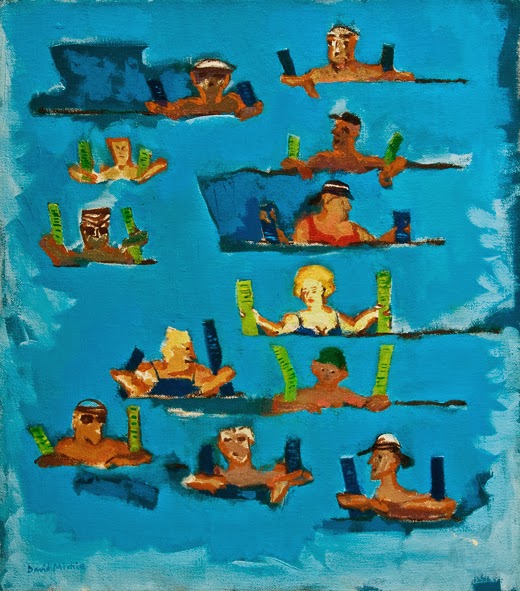 In the Fitness Pool with Noodles  oil on canvas, 40.5 x 35.5 cms
image courtesy of Art in Healthcare

Another favourite filmmaker of his of that period is Jacques Tati. He particularly remembers Jour de Fête, the hilarious slapstick account of a postman’s tribulations set in a small French village. Its humour is due to Tati’s perfect timing and miming genius in the main role. Michie was particularly captivated by the beautifully observed tiny incidents that all add up to turn this very simple narrative into a work of art. His own power of observation and sense of humour come through in many of his paintings, such as the deliciously witty In the Fitness Pool with Noodles where he pokes gentle fun at aqua aerobics enthusiasts.

Michie’s paintings are always born as a response to what he sees around him and from observations captured in a few seconds in his sketchbooks. His latest project is the publication of a selection of these sketches. This book promises to be as entertaining as it will be revealing of his many sources of inspiration.