Marjorie Campbell was a professional book illustrator, graphic designer and lecturer. She was a most talented and prolific artist who left a collection of works that amaze by their diversity and strength. 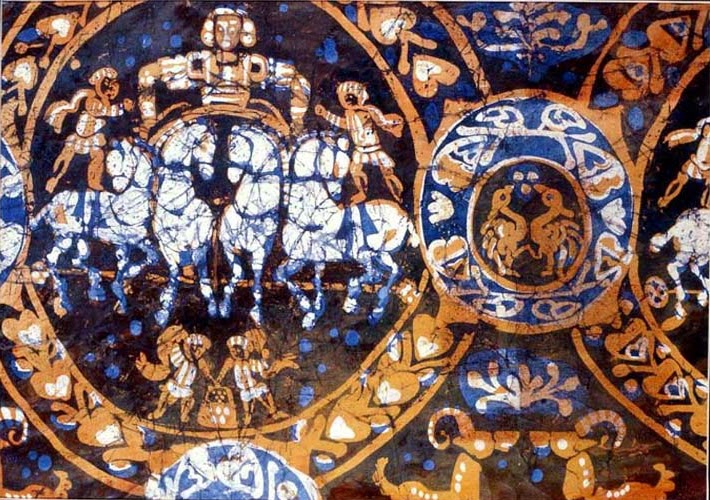 Marjorie’s younger sister, Dr Alison Kerr, has made a meticulous inventory of her sketches, drawings and paintings and numerous sketchbooks. She showed me a selection while telling me her family history. The two girls were born in northern China where their parents were medical missionaries during the Sino-Japanese war. When their father died of typhoid aged 31, their mother had to make the perilous journey to the coast during brief periods of ceasefire with her two very young daughters of three years and eleven months respectively before boarding a ship home, a passage which during WWII, was fraught with danger. 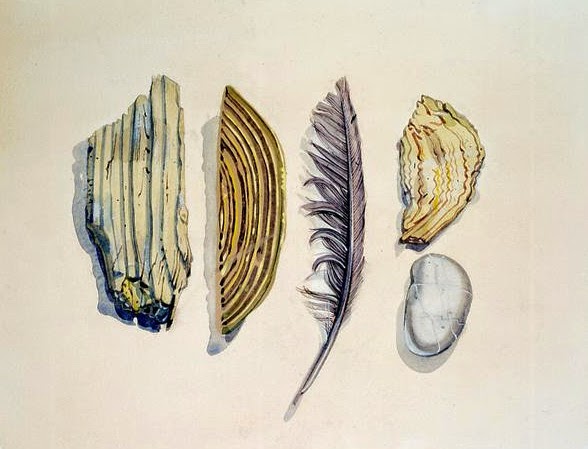 One Feather & Four Stones
image courtesy of A G Campbell

Back in Scotland, they settled down first in Inverness-shire and later in Edinburgh. Theirs was an artistic, musical and very supportive family. They occasionally received visits from missionary friends who would mesmerize their young audience with true and heroic stories. Later Marjorie would provide others with the same warmth and generosity she had grown up with. 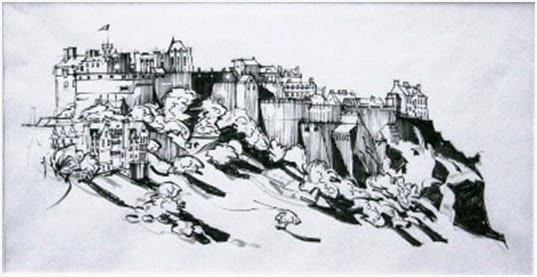 Her talent was soon noticed and nurtured at home and at school. Alison remembers how their mother, now a teacher, involved her older daughter in creating art work in preparation for her own class teaching and in drawing paper dolls with which the two girls played. The family enjoyed outdoor pursuits such as camping and cycling that offered many sketching and painting opportunities. The Highland and Hebridean landscapes impressed Campbell early on, particularly the island of Lismore where she would often return as an adult with her husband and four daughters. 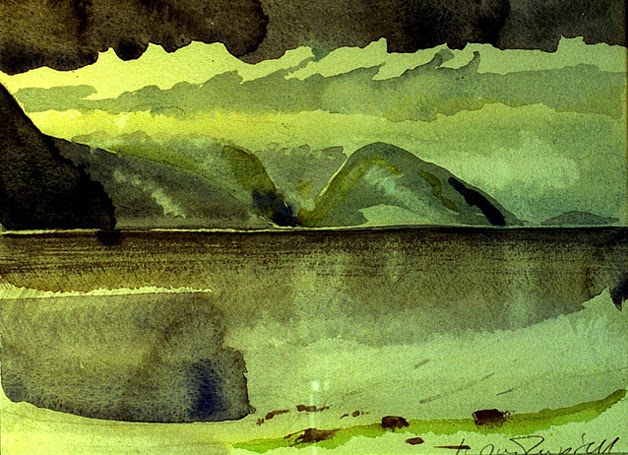 In 1954 Campbell went to Edinburgh College of Art, winning scholarships to London in 1956 and Paris in 1957. She qualified as a designer and book illustrator, a considered choice that combined her love of books and art and could earn an income. She became a Member of the Society of Industrial Artists and Designers in 1985 and also applied her design talent to quilting for her family and friends. In 1989 she founded Luckenbooth, a small crystal engraving business, in collaboration with engraver Wilma MacKenzie. 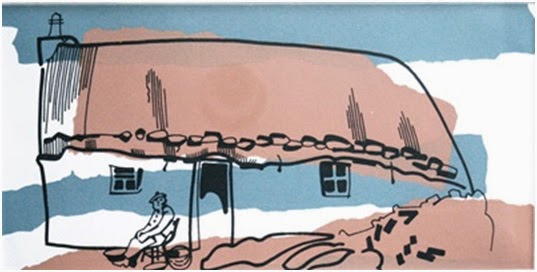 In parallel with her professional practice, Campbell never ceased to draw and paint the world around her, her children, still lifes and flowers.  These loose and expressionist sketches, quickly executed, reveal an artist always challenging herself and equally at ease with representational or abstract language. 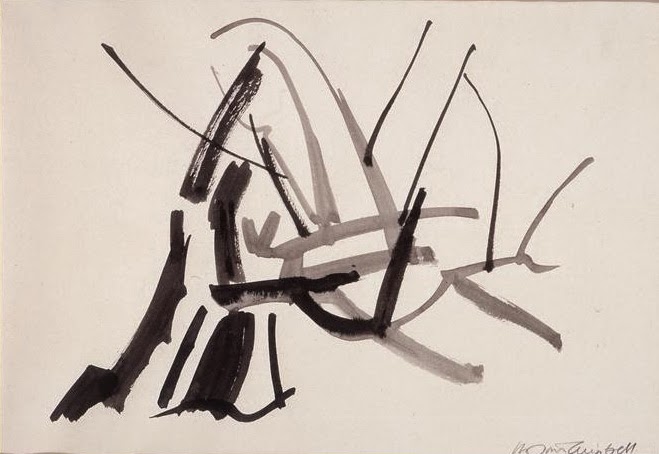 Dr Kerr explains that Campbell did not regard these experimental and fluid works as especially significant and many were given away or simply disposed of but those she kept were tucked away in an attic space. It was only after her death that her close family discovered the extent of her output and have since endeavoured to make it known.
For a couple of years Campbell had a studio in an abandoned brick works near Edinburgh, an environment that inspired a series of works featuring industrial rejects that she endowed with animal-like presence 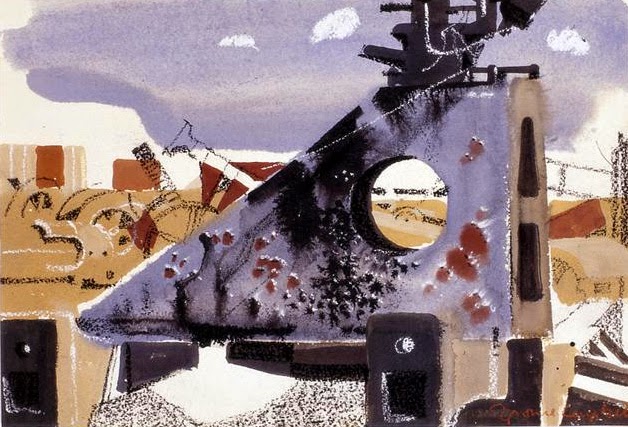 Marjorie would have approved wholeheartedly the donation of sixteen of her works to Art in Healthcare to brighten up healthcare settings. Together they showcase the artist’s talent in a variety of media such as watercolour, pen and ink, screen print and oil from the fine details of ‘Edinburgh Castle’ to her powerful and subjective landscapes and seascapes.
A surprise for the family was to discover several doll pictures among the attic stash. Reminiscent of her childhood cut outs, these dolls, despite their smiley face, are poignantly eerie and allude to carefully hidden turmoil. 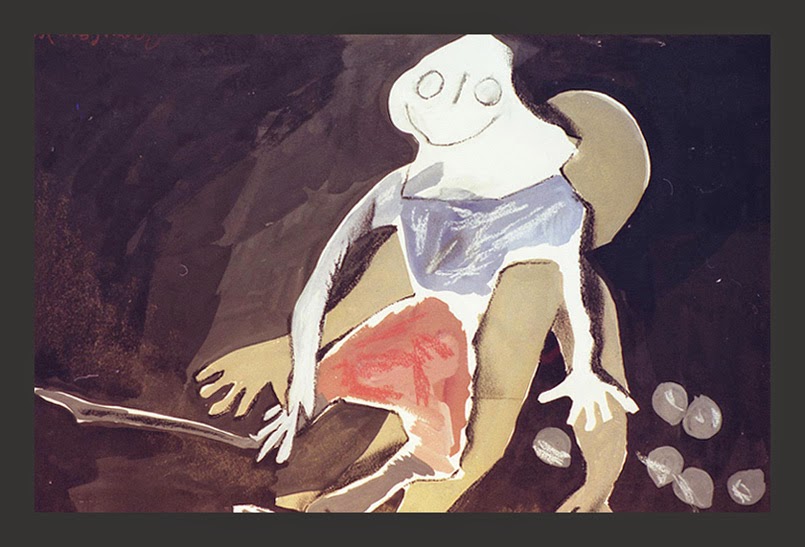 As a whole the collection offers a remarkable insight into a personal artistic journey that epitomizes the renaissance of Scottish art in the second half of the twentieth century. It deserves to be pored over and appreciated by a much wider public.

With thanks to Dr A Kerr and A G Campbell