At the height of summer and in this year 2013 of Natural Scotland, it seems highly appropriate to keep our focus on the artists in the Art in Healthcare collection who find inspiration in nature and Leo du Feu is the perfect choice. 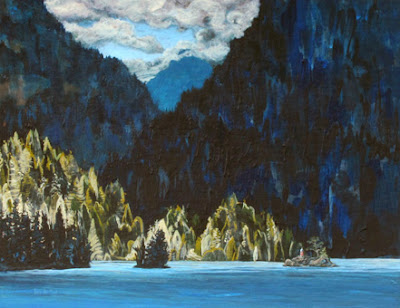 A Hint of Red, West Coast Canada   22x29cm, acrylic on card
image courtesy of the artist

Leo’s name has come up before in this blog in the post ‘Art in Healthcare Reaches Out’ dated 27 November where I reported on the workshops he led for Art in Healthcare in the Royal Hospital for Sick Children. To inspire the young participants he had specially chosen the painting of a bird from the AiH collection. This choice was not random as Leo is himself an enthusiastic birdwatcher.

Leo du Feu who has just turned twenty-nine, is a full-time artist who paints in the great Scottish landscape tradition and like many artists of his generation his talent is many-sided. Full-time really means full-time as his website and blog reveal the diversity of his practice.
As well as a painter with an impressive list of exhibitions and awards to his credit, he is also an educator who gives talks and leads workshops in healthcare settings, for local authorities and art groups, and also for Historic Scotland in his home town of Linlithgow. 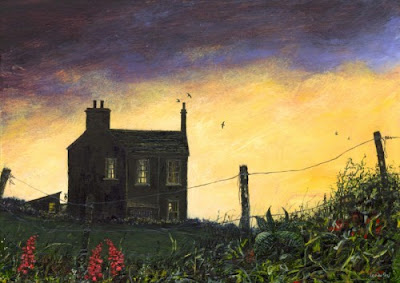 The nineteenth century Romantic landscape painters could rely either on private wealth or on generous sponsors to pay for their travelling expenses. But their present-day counterparts have to vie for a limited number of travel scholarships and Leo has deservedly won a number of them that have taken him on journeys around Scotland and across Canada. Leo has already had one book published Sketches from Canada and a second Landscapes and Birds of Scotland, an artist’s view due to come out in October, will be accompanied by a solo exhibition at the RGI Kelly Gallery in Glasgow.


His paintings, mostly acrylic, range from postcard size to several metres high such as the four paintings commissioned by the Royal Observatory Edinburgh, now on permanent display in the foyer of their new Crawford building. 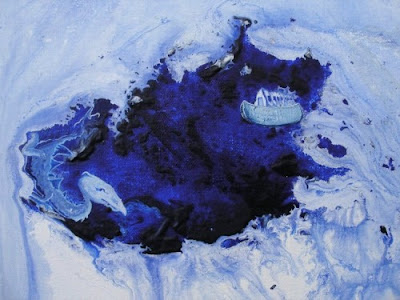 detail from the series Through the Telescope, acrylic on canvas,
UK Astronomy Technology Centre,  image courtesy of the artist


His close-up studies of birds are on an intimate scale. They convey his fascination for them as he endeavours to “get a bird right” and his knowledge of their anatomy and behaviour. On the other hand, his landscapes of spectacular hills and skies, intense wooded areas and coastal scenery, allow his lyrical temperament to come through with dramatic light effects and compositions which allude to the land of dreams.
His blog ‘Landscape, art, nature, birds’ eloquently records the observations he makes during his frequent trips around Scotland, including to the Highlands and islands, filling up his sketchbooks with drawings that he develops later back in his studio into paintings. Increasingly Leo also completes finished watercolours out in the field. His style is representational and this reflects his deep respect for his subject matter. 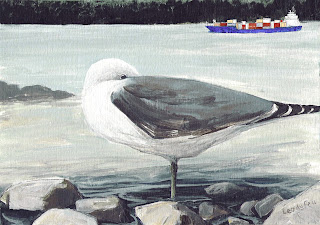 The importance of sketching can never be overstated. Professional artists need to sketch like athletes need to exercise and even if nothing in particular catches his attention while he is out and about looking for material, Leo will nonetheless stop in his track and “force himself to draw and see what happens”.  The accumulation of sketches and notes altogether add up to a very personal database of marks, colours and sensations that he retrieves later in his studio to produce the artwork. Then the creative process really begins. 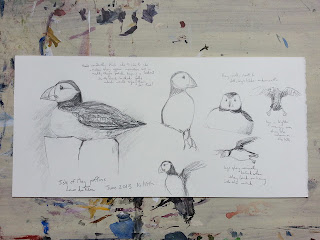 Isle of May Puffins  blog post, June 2013
image courtesy of the artist

I particularly like the recent blogs he posted during his week-long trip to the Nature Reserve on the Isle of May in the Firth of Forth. They are a very entertaining recollection of observations and anecdotes with photographs and sketches that will delight everybody. I can’t decide which of his chance meetings I prefer, the rock pipit aka lbj for ‘little brown job’ or the preening terns he captured in mid contortions!

There is no doubt about it, Leo’s success is due to both his talent and hard work and through his skilful use of social media he is also able to reach a wide audience for their enjoyment.


With thanks to Leo du Feu for his information. You can follow him through his website and social media pages: