For my second blog, it is my pleasure to ‘uncover’ the artist Damian Callan.

The human body in motion is a constant source of inspiration for Callan. He often depicts his own children, in groups or singly, by the sea or swimming pools as they paddle, row, run and sometimes simply stand still or sit down. But even when apparently motionless, the body is not inert and Callan’s consummate knowledge of anatomy illustrates this paradox with mastery. His paintings and drawings convey all the fun and happiness that children find in physical pursuits. They exude health and well-being.

The two paintings in the Art in Healthcare collection are early works from Callan’s degree show at Edinburgh College of Art in the mid 90s and both are set in swimming pools.  They are quiet studies. In ‘Boy with Armbands’, there is no splashing about, no shrieking with fear or pleasure, rather the artist has chosen to describe the motion of the bodies as they wade slowly through the water, feeling its weight as they push their way through.  As in most of his work, the figures are rendered broadly and details are kept to a minimum. This simplification is deliberate as it emphasises the subject’s movement and the dynamics of the composition. 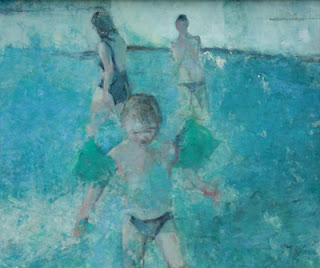 'Boy with Armbands' Damian Callan, oil on board, 1995, Art in Healthcare collection

Another of Callan’s skills is his use of back-light and shadows to create an atmosphere. It comes as no surprise to read on his website that he admires Edgar Degas, the Impressionist grand master of light and movement, famous for his studies of ballet dancers and horses and for his dramatic use of ‘contre-jour’. In both paintings in the Art in Healthcare collection, Callan has captured to great effect the particular luminosity, a mix of artificial and natural light that saturates swimming pools.

Following a commission by Sports Scotland to produce a series of paintings for their head office in Stirling, Damian Callan has been, for the last four years, in tune with the nation’s Olympic mood and working with divers from Edinburgh and young gymnasts from Lasswade. With oil and charcoal and also, for the first time, with stencils, he has pushed the process of abstraction further still. 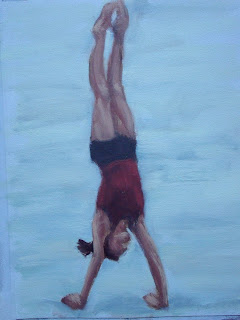 He has clearly enjoyed the experience: “It has been a treat to work with all the movement in these disciplines as well as the colour in the swimming pools”. But he also confides that he has missed not working with his children. Even without that personal element, I feel assured that he will have grasped the essence of his subjects and as one of his ex-pupils, I know that he will have made them feel relaxed very quickly and helped bring out the best in them.

Martine F Pugh is a freelance writer and visual artist based in Edinburgh.