On 8th May 2012 Art in Healthcare hosted a hugely successful fundraising evening at the Ingleby Gallery with the  internationally recognised Scottish artist, Callum Innes, giving a tour around the gallery and his paintings currently on show. Innes studied at Grays School of Art in Aberdeen before going on to establish his own style of reductive painting. He was nominated for the Turner Prize in 1995 and later went on to win The Jerwood Painting Prize in 2002.

Walking into the Ingleby Gallery I had no idea what to expect from Callum Innes’ latest exhibition. As a relative ‘newbie’ to contemporary art myself I was looking forward to hearing about the thoughts and processes which go behind his modern, minimalist style.

Innes’ work is often very bold and intense, making use of statement colours and shapes to draw emotion out of the audience - a complete contrast with the artist himself who was very soft spoken and eloquent as he addressed the 20 or so people gathered in the gallery with a great passion for his work and craft. Everyone attending the evening’s fundraising event was pinned on his every word as Innes described his beginnings as an artist, his old college tutors, anecdotes of artists he had worked with, and parts of his life which had inspired his own art.

“All these works are fragile, emotionally, physically…and (they) retain a human fragility about them. They’re imperfect; if they were perfect they wouldn’t work” 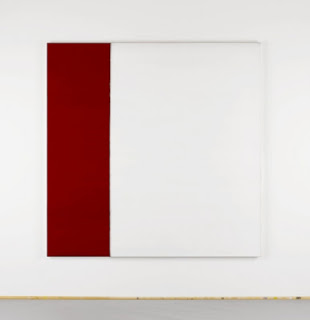 He told us how he regularly finds himself throwing work away and how he is somewhat of a perfectionist. Once out of the studio or exhibition context he regularly sees his work in a completely different light and often discards it completely. He once worked with curator Marco Livingston on a run of 50 books which were to be beautifully letter pressed and each covered with an individual painting. However, when the time came to wrap the books, it was discovered the paintings had been cut down 2cm too short and were therefore unusable. Innes immediately went up to his studio, gathered pictures which had been displayed in the Tate and in the ICA, and cut them all down to the correct size, destroying 30 paintings to make 50 books.

“It was about trying to achieve perfection. I learnt in that process of looking at your work and making decisions about it. I learnt how to edit, which is something you can only really learn through time, and I’m still learning.”

The ‘Works on Paper’ exhibition at the Ingleby Gallery fundraising event was filled with paintings focussing on what had been taken away from the painting, what wasn’t on the page, and what had been left behind, rather than what had been created by the paint. Innes described how when painting onto wax paper, turpentine made certain parts disappear and it was this in which he was most interested 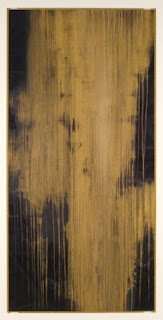 Having been a figurative painter until his early 20’s Innes told us how he slowly worked the figure out of the painting but still kept the gesture and the marks to make paintings as objects. The small series of squares which were displayed on the upper level are an example of this. Two blocks of colour had been painted over each other  freehand to create a semi-transparent look. The result is wonderfully effective and the bold colours oozing out the side of squares really draw in the eyes of viewers. 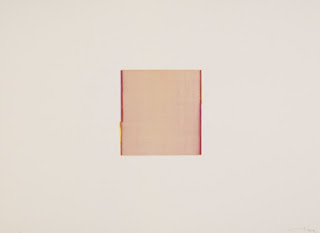 “In all the paintings I make there is always a single line that goes through the painting; there’s a moment where the canvas is filled with oil paint and I take a line from the bottom to the top of the canvas so it doesn’t meander, it looks like its formed naturally but it’s controlled, picked out very delicately and it forms itself at a certain point.”

Innes’ work will be displayed in the Ingleby Gallery until 14th July 2012 and I highly recommend you make a trip along. Seeing the different layers and textures of the paint on the paper, and understanding the form and gesture of each painting gave me a much greater admiration for contemporary and abstract artists. Innes has also kindly donated two pieces of his work to Art in Healthcare’s collection, one of which will be displayed in the new Royal Victoria Building at the Western General Hospital along with a large selection of other fantastic artworks from our collection which we have just recently hung there.
Posted by Art in Healthcare at 11:08